Pope Francis and Authority: The Collapse of ‘Command Catholicism’ 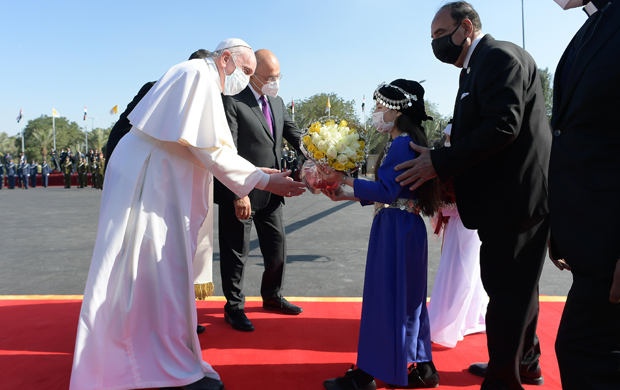 “…the only authority is the authority of service, the only power is the power of the cross.’ Pope Francis – quoted by Cardinal Mario Grech in his address to the bishops of Ireland, March 4th, 2021.

‘He’s just a nice guy. He really hasn’t done anything yet!’

This overheard remark typifies a certain kind of disillusionment with the Argentinian bishop who became bishop of Rome, and therefore also pope, in 2013.

If he hasn’t agreed to the ordination of women and married men, and to the blessing of committed LGBT couples – and hasn’t ‘cancelled’ the Congregation for the Doctrine of the Faith (CDF) – the church’s ‘Theology Police’ – and has not even fully resolved the problems of clerical abuse or financial management – then what has Pope Francis done of any importance?

The answer lies in his recognition of the end of Christendom and his redefinition of Christian authority in line with Jesus’s firm instruction to those who would follow him – never to ‘lord it over’ anyone. In so doing Jorge Bergoglio has refashioned the papacy also, has fatally undermined the disease of Catholic clericalism – and has restored the freedom of the Holy Spirit to move and guide Catholic Christian families directly, from Confirmation on.

For someone born in 1943 who has now witnessed seven papacies in total – beginning with that of Pope Pius XII – this has been an historical transformation of enormous importance.

Not even Pope Francis’s immediate predecessor, the formidable Pope Benedict XVI, had felt ready to wave goodbye to Christendom – the ideal of the state-privileged Christian society guided by a politically powerful Catholic hierarchy. Pope Benedict was also deeply perplexed by Jesus’s apparent decision to do without the power of compulsion – by his decision to reign ‘from the cross’. In 1996, responding to a journalist’s question on what often appeared to be the greater power of evil in the world, the Bavarian cardinal had replied:

“This is, of course, exactly the question that I too would ask the ‘world-spirit’: Why does he remain so powerless? Why does he reign only in this curiously weak way, as a crucified man, as one who himself failed? But apparently that is the way he wants to rule; that is the divine form of power. And the nondivine form of power obviously consists in imposing oneself and getting one’s way and coercing.”

In the years that followed – especially the years of his own papacy – Pope Benedict encountered the limits of his own power to ‘impose himself and get his own way’ within the church itself.  He was obliged also to observe the apparently total victory of secularism over his church in the waves of scandal that overtook the Catholic clerical system from 1985, beginning in the USA.

The Argentinian Bishop Jorge Bergoglio was another observer of these events. He had learned something else about authority from direct encounter with the lives of the poorest in Argentina, something also evident in the Gospels: the authority of Jesus had come not simply from knowing the Hebrew Bible but from his sharing the deprivations and dangers – and outcast social status – of those he sought to teach. This was above all an authority born of social humility, compassion and companionship – rather than of academic expertise.

Pope Francis had therefore come to understand that Christendom – the long centuries of the church’s rise to social and academic ascendancy after 312 CE had distanced its summit from its base.  It had developed in too many of its diocesan ‘secular’ clergy a social aloofness that left them unable to communicate the Gospel.

In Ireland, also hamstrung by the legalism of Rome, these were mostly unable to communicate dynamically with an urban underclass too often left behind by economic development. When waves of clerical sexual scandal began in the 1980s, the scene was set for a massive advance of secularisation and the apparent defeat of the Gospel.

When the rivalries of Roman cardinals became another global scandal in 2012 – the ‘Vatileaks’ affair – the paralysis of ‘Command Catholicism’ – a system that required a pope to have firm control of a disciplined bureaucracy in loyal lockstep with himself – was complete.

The same lesson was meanwhile being taught by the practical failure of the birth control encyclical Humanae Vitae of 1968. How could a Catholic clergy – themselves denied practical experience of the intimate intricacies of married life – command lay people to observe these rules for birth regulation? As many priests were unconvinced they should even try to do so, the encyclical doomed the Irish church to decades of mute non-compliance and the withering of the internal discussion needed to cope with rapid social change. Appointed to adhere to Humanae Vitae, Irish bishops never publicly acknowledged the dire impact of the encyclical upon the Irish church’s morale and internal vitality – and probably never told a pope about that either – at least until the arrival of Pope Francis.

And so the abuse scandals from 1994 hit us with the force of a tornado striking a wooden house riddled with woodworm. Can Irish bishops, and the mostly ageing clergy they lead, adapt quickly now to authority-as-service? In one sense the ongoing pandemic is helpful in this transition – by delaying any dramatic experiments in listening to large groups in the same space, in the short term. As ‘first responders’ also to many of the trials and family tragedies of this crisis, many priests have proven the authority of the texts they preach about – and witnessed the sacrifices of unordained members of the social and health care sector of Irish society – the ‘essential workers’ who are so often unjustly paid.

As the power-to-command of Irish bishops and clergy has declined, the irreplaceable value of an ethic of personal sacrifice and service has therefore become ever more obvious. There will be many such stories to share in the months and years ahead – and the survival of the Francis papacy to this critical moment is surely providential. No other way forward for the Irish church can surely now be seriously contemplated.

Christendom is over – and with it the era of ‘authority from above’ – i.e. of someone ‘up there’ telling everyone else what to do. Only those who embody the Gospel of companionship, compassion and moral example can exercise the authority of Jesus. Legalistic micromanagement from the top has been as ineffectual and disastrous for Catholicism in Ireland as the Communist Politburo and its five-year-plans were for the USSR.

In naming pride as the besetting sin of the micromanagers and careerists in the church Pope Francis has also provided a secure foundation for a moral theology freed from a ‘fixation’ with sexuality – the obsession that fuels his opponents on the Catholic ‘Right’. Understood as the drive towards proving one’s own moral superiority, pride became the besetting sin of religious elites under Christendom.

Nothing else is needed to explain how even a Catholic education can foster the vast inequalities of contemporary society, and why Irish Catholic schools typically fail nowadays to leave most of their their students with a dynamic and vibrant faith. It has taken a Pandemic in the end to bring the Irish hierarchy to the point of embracing Pope Francis’s vision of the future church.  Only we Irish, in communion with the Holy Spirit – and with one another – can put an Irish ‘spin’ on that vision. Using modern communications as the Pandemic has taught us, we can, and should, begin immediately. Sean O’Conaill – 24th March, 2021