Pope Francis calls US bishops to change of mindset 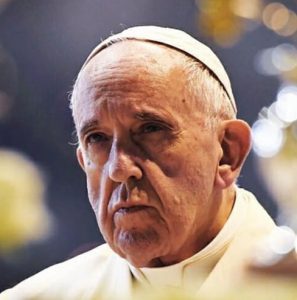 ‘A Living Fabric has Come Undone…’

“In recent years, the Church in the United States has been shaken by various scandals that have gravely affected its credibility. These have been times of turbulence in the lives of all those victims who suffered in their flesh the abuse of power and conscience and sexual abuse on the part of ordained ministers, male and female religious and lay faithful. But times of turbulence and suffering also for their families and for the entire People of God.”

So Pope Francis says to the bishops of the Catholic Church in the USA, in a letter dated January 1st, 2019. This comes when the US bishops appear divided, fractious and incapable of uniting around a single clear policy for healing the deep wounds in their church communion.

“The Church’s credibility has been seriously undercut and diminished by these sins and crimes,” Pope Francis continues, “but even more by the efforts made to deny or conceal them. This has led to a growing sense of uncertainty, distrust and vulnerability among the faithful. As we know, the mentality that would cover things up, far from helping to resolve conflicts, enabled them to fester and cause even greater harm to the network of relationships that today we are called to heal and restore.”

How many would say that exactly these strictures could be uttered in the case of the Catholic Church in Ireland, most of whose bishops have failed even to give enthusiastic welcome to the pope’s early calls for them to experience ‘the smell of the sheep’.

God’s faithful people and the Church’s mission continue to suffer greatly as a result of abuses of power and conscience and sexual abuse, and the poor way that they were handled…

“The Church’s credibility has been seriously undercut and diminished by these sins and crimes, but even more by the efforts made to deny or conceal them…”

‘Bunkering down’ would probably be better description of the style of the typical Irish bishop – or ‘battening down the hatches’ as storms rage overhead – rather than metanoia, change of heart and mind. The day for facing the storm – for radical listening to the faithful – has not yet arrived, more than half-a-century after Vatican II. So the following, from the same papal letter, seems appropriate:

“The loss of credibility also raises painful questions about the way we relate to one another. Clearly, a living fabric has come undone, and we, like weavers, are called to repair it. This involves our ability, or inability, as a community to forge bonds and create spaces that are healthy, mature and respectful of the integrity and privacy of each person. It involves our ability to bring people together and to get them enthused and confident about a broad, shared project that is at once unassuming, solid, sober and transparent. This requires not only a new approach to management, but also a change in our mind-set (metanoia), our way of praying, our handling of power and money, our exercise of authority and our way of relating to one another and to the world around us.”

For Pope Francis’s entire letter to the US bishops, click here: Francis – Letter to US Bishops 01-01-2019