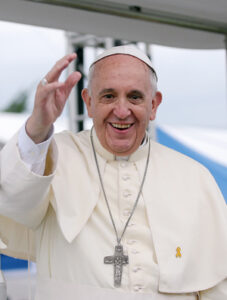 In a move toward promoting family prayer and faith formation, and the role of all lay people in the mission of the church, Pope Francis has instituted the lay ministry of Catechist.

On Tuesday May 11th, 2021, he made catechesis – formal instruction in faith – more than simply a teaching role, by raising it to the status of a lay ministry.

This step is certainly related to the increasing shortage of priests in many developed countries – such as Ireland – as well as to the pope’s insistence that all members of the church must learn to be missionaries in an increasingly secular society.  In Africa, Latin America and Asia, catechists play a vital role already, due to the relative scarcity of priests.

“It should not be forgotten that in various regions where the presence of priests is inexistent or rare, the figure of the Catechist is that of one who presides over the community and keeps it rooted in the faith,” declared Archbishop Rino Fisichella in presenting this step.

“… the reception of a lay ministry such as that of Catechist will emphasize even more the missionary commitment proper to every baptized person, a commitment that must however be carried out in a fully ‘secular’ manner, avoiding any form of clericalization.”

It seems likely that realisation of this role of the Catechist in Ireland will be included in the deliberations of Ireland’s ‘synodal pathway’, launched by the Irish Bishops Conference in March 2021.  With the mean age of Irish Catholic clergy now 70 years, and ‘co-responsibility’ the programme of the future – and school-gained instruction failing to maintain a practising faith in many cases – this role of the Catechist in parishes is likely to become vital.

The likely aim, however, will not be to give the Catechist the current status and authority of the priest but to raise up the family – the domestic church – as the most important agency for early faith formation – and to give every individual Catholic a sense of participation in the church’s mission.