PureMentalNI: ‘Children of the Troubles’ have had Enough of Adult Inaction

“Everybody here knows someone who has taken their own life, and there’s been no change and its absolutely heartbreaking.”

This was Lucinda Graham – interviewed for the BBC in Belfast’s Cornmarket on Jan 4th, 2020. She and dozens of other school-going students were protesting the lack of action and resourcing for youth mental health in NI schools – and the continuing background inertia of NI politics. With a 13th January deadline looming for agreement on a power-sharing executive, these young people have had enough of waiting around while lives are at stake.

The demonstration had been initiated by PureMentalNI – a new start-up to lobby specifically on behalf of the school-going generations. Founded by two seventeen-year-olds, Matthew Taylor and Jay Buntin, it is a reaction against what they call ‘a severe lack of education on and awareness of mental health issues‘.

They blame first of all the NI Department of Education for this – for leaving schools under-resourced.

“We have seen mutual friends who have been in need to help and support in school, with very serious issues, and were often brushed aside and not taken seriously – it was instead individual teachers, rather than pastoral care team members who helped them,” says Jay Buntin.  “Very little time has been spent on making clear what services are available inside and outside of school, what procedures are in place, and how to look after one’s mental health – this is opposed to physical health, which has a lot of time spent on it by schools (and rightfully so).”

“We have had support from, and have worked with, young people, schools, and politicians from all over Northern Ireland, and religions. Mental health is an issue that affects everybody, it doesn’t matter what religion they belong to or what political beliefs they hold. We have had support from unionist politicians in the Ulster Unionist Party, nationalist politicians in the SDLP and Sinn Fein, and those in the middle from Alliance. We have been working in predominantly protestant schools such as Wallace High School and predominantly Catholic schools like St Dominic’s. The young people joining us come from all different backgrounds and have presented only one thing – young people’s mental health – not any creed or tradition.”

When we asked what PMNI sees as missing in schools’ ‘pastoral care’ Jay answered: 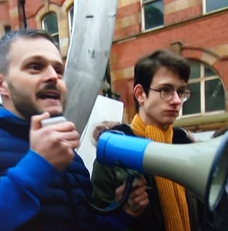 “In one school we looked into we discovered that if a pupil had a serious mental health issue (and would need referral to a professional service), they would need to do the following: speak to their teacher; they would pass it onto the pupil’s head of year this would then be passed on to the vice-principal in-charge of counselling; they would then pass this onto the pupil’s parents and the school counsellor; the school counsellor would then tell the head of safeguarding; finally, they would pass them on to the necessary professionally service. We think this leads to far too many people being involved, that it’s far too time-consuming and inefficient.”

Budgetary constraints on schools are also an issue for the group:

“Schools need to be able to provide training for their staff so that they can effectively deal with mental health issues as they arise, and schools need to have the resources to educate staff and pupils on looking after their own mental health, and that of those around them. Without funding and direction – due to an absent Stormont currently – schools will find this increasingly difficult.”

Asked whether the churches could have a useful role in this situation, Jay replied:

“Church does offer comfort to those worried about the  anxieties they face. It can give them answers in times of discomfort and vulnerability. This does give relief and hope to many, and can, doubtless, help some with mental well-being.

“However, for historic reasons, many may feel uncomfortable sharing their problems in a church environment due to a perceived closed mindset. Furthermore, there can be a lack of trust between the public and the Church (particularly the RC Church).”

When asked about this latter circumstance, Jay made it clear that the issue of clerical abuse and its mishandling by senior clergy is well understood by young people today.  However, there is, he insists, the potential for a positive role by all churches.

“Similarly to schools, churches are somewhere that a message of well-being, of one’s mental health and those of others can be shared and promoted. There are great teachings of protecting one another from physical harm, the same can be applied to mental health. Church is a key platform which is rarely used to promote this message. The teachings of hope, of positivity and love can certainly form part of the solution to this suicide and mental health crisis we face.

“Talking is key to dealing with mental health, and whether it be confession, one-to-one with a pastor of any kind, groups or sermons – churches talk. They let congregants share issues and seek guidance and support. This is certainly beneficial to their mental health. Finally, churches form a kind if community – this sense of belonging and companionship is very important.”

and can be found also at: