Quo Vadis?: Collegiality in the Code of Canon Law by Mary McAleese (2012) 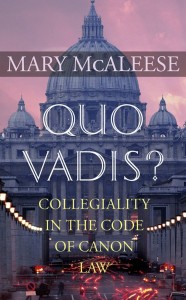 In her first book since leaving Aras An Uachtarain, Mary McAleese has produced a masterful and highly accessible study of how Vatican II’s teachings on collegiality, or how power and responsibility were to be shared between the Pope and the college of bishops within the Catholic Church, have either been sidetracked or not yet come to fruition, depending on how you interpret the events which followed the Council up to the present day. Vatican II embraced a fresh new vision of the Church as the People of God, turning away from the rigidly hierarchic structure of the past. It left a clear picture of the Church as communio or community but no clear road-map of how to get there. While it sowed seeds of confusion it also infused into the Church an expectation of broader ecclesial participation and co-responsibility which has impacted in many different ways. Fifty years on from Vatican II, however, there is neither an orderly progression nor a fully choate story. Some commentators caution that Vatican II must be seen as a slow burn with still unharvested potential for change. Others see the debate about collegiality as over either because the Church, in their view, already has ample collegiality or because collegiality has died on the vine. Against the background of silencings by the Vatican of Irish priests, and the results of the Association of Catholic Priests recent survey of Catholic attitudes, this thoughtful and balanced assessment of what happened to the notion of sharing power and decision making within the church is very timely. Quo Vadis? is a timely contribution to the ongoing debate within the global church on where we are going, or Quo Vadis?

About the Author
Mary McAleese served as Ireland’s 8th President for 14 years (from 1997 to 2011), going on to study for a doctrinal degree in Canon Law in Rome.