Remaining a Catholic after the Murphy Report by Kevin Egan (2011) 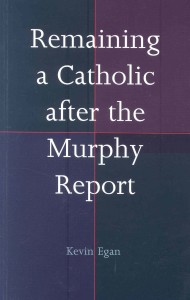 This book is addressed to ordinary decent Catholics, those on the edge of the church, and all those who are of the opinion that churches might have something positive to contribute to society. It explores the key questions that arise out of the clergy sex abuse crisis: What happened? Why did it happen? Where do we go from here? In a style that is as pastoral as it is analytical, Dr Egan critically traces the clergy sexual abuse crisis which has rocked the Catholic Church in recent years. He outlines the key findings of the Murphy Report and the responses made by church leaders at local level and by the Vatican.

He goes on to explore the factors that led to the Catholic Church’s attempt to conceal the scandal. He looks at this through a systemic lens. He shows how a clerical culture which put the protection of the institution before the protection of victims contributed to the cover-up. Reform of that culture is key to moving forward.

The church is faced with a crisis of credibility, which is a gift from the people to church leadership, and that gift has been withdrawn. Here is a teacher who engages the reader in a conversation around what needs to happen if the credibility of the Catholic Church is to be restored.

About the Author
Dr Kevin Egan is Head of the Department of Behavioural Sciences at All Hallows College, Dublin City University. He has researched and taught on the topic of clergy sexual abuse since the mid-90s and has worked clinically with both victims and perpetrators.