‘What is the Emerging Church?’ (click here to watch video)

We live in a turbulent and difficult time for the church.  Many worry for their families and wonder will faith remain an integral part of their lives in the future.  So has the Holy Spirit gone on holiday or is that Spirit doing, as someone has said, ‘a new thing with the ancient story’?   Franciscan Fr Richard Rohr is in no doubt that we are experiencing ‘An exciting new beginning’.  Some are calling it the ‘The Emerging Church’.  It would seem that whatever name we give it, something very new is happening.  The Holy Spirit is alive and active in our post-modern world.

The nature of institutions is to become preoccupied with self-maintenance, self- preservation and self-perpetuation. (as illustrated in the story of the Life Saving Station – see video)

1. In recent years there is honest, broad, ecumenical Jesus scholarship that is finding a strong consensus about what the Gospel is really about.

2. There is evidence of advancement in human consciousness, an emerging contemplative, non-dualistic mind, that allows the whole field of reality to teach us.

3. The major concerns of Jesus are a lot different than the concerns emphasized by today’s churches. How did we get this far from Jesus? What is emerging is a more humble approach to this question, not in an angry, adversarial way; rather in a hopeful, prayerful way. Not kicking out tradition. This is very different from any previous reformations.

4. A new type of reformation. What seems to be slowly emerging is a new community way of doing reform, through other complimentary structures. However, this does not mean creating new denominations. We don’t need more denominations. This appears to be a new notion on how to reform things.

In the talk Fr. Richard delves into each of these four areas to examine more closely what he has observed happening in many parts of the world.  He definitely sees the fruits of the Holy Spirit at work in the broad field of what is being called “The Emerging Church”. This talk is a clear and very helpful introduction to this dynamic new phenomenon.

More ‘Churchianity’  than ‘Christianity’.  For example arguing the seven sacraments.

In other words, there has been more of a focus on the container rather than the contents.

Being good at languages was considered a prerequisite for being good at scripture scholarship, particularly Hebrew and Greek (and Latin).  Yet Jesus spoke none of these languages (and Latin was the language of his oppressor), so his exact words cannot be known.  What emerged and is emerging is a reading of scripture through the eyes of cultural anthropology. i.e. understanding the culture of Jesus’ time and the context in which he lived, spoke and ministered.

There is now a recognition that almost all scriptural interpretation, scholarship, preaching and teaching has been done by white, over-educated, European or North American, males, and many of them celibate.  What is emerging are new lenses through which the scriptures are being read, e.g. through the lenses of women, the poor and marginalised (Latin America and Africa), Black people, Gay people, the Jewish lens (Jesus was not a Christian.  Did Jesus really intend Christianity or was his intention to reform his Jewish tradition, and through that, reform all religion.  Jesus’ critique of his Jewish religion was/is really quite shocking).  Also more lately there is the lens of ‘Sincere secular seekers’ with no church baggage or agenda (the non-churchy lens).

2. The New Contemplative Mind (a new level of consciousness)

A contemplative mind is the mind that emerges when we pray before thinking.  It moves us beyond fear, judgement, agenda, and analysis.  It takes in the whole field and not just what we can process, understand and agree with.  It is the capacity to live with mystery; with not knowing.  It doesn’t jump to quick, fixed opinions which only serve to close down dialogue and respect.  Hence it values conversation as a route to transformation.

While contemplation was natural to earlier generations that were close to nature and was also taught systematically up until the 14th century, it was eventually overshadowed by the rationality of the enlightenment and the industrial revolution (still important and necessary stages of the human journey).  It is now being rediscovered and is not the reserve of any one group or denomination.  It is finding an acceptance among evangelicals (and even in a sense in the secular scene through ‘mindfulness’).

The contemplative mind can use the Scriptures not in an adversarial way to prove ourselves right and others wrong, or to convert the Nations, which makes the sometimes wrongful assumption that I, myself am converted.

With this new mind religion becomes an open quest rather than a fixed conclusion. (Less dogmatic).

There is a recognition that the ‘non-negotiables’ of the contemporary Church are at major variance with what Jesus clearly emphasised.

The ego forms itself by being against things.  Don’t feed the ego with oppositional energy.

We need a new kind of reformation that doesn’t react, rebel, or hate anything.  A spiritual reformation cannot be achieved by hating).  Know what you are for; what you believe in; and what you have fallen in love with.

Rather, the best criticism of the bad is the practice of the better.  Just do it better.

Adopt the strategy of double belonging if necessary for survival of faith and practice.  A grateful foot in two camps, without necessarily, or permanently leaving the historical tradition.

New structures can take many forms and can be seen as ‘critical communities’ or ‘transformational systems’ rather than the ‘belonging and believing systems’ of the past where people idealised the top, and just believed things that they were given by external authority (usually highly academic, dogmatic, moralistic, but not transformative).

Ministry and leadership in the emerging church should be measured not by solely by office, but by effectiveness and competence.  Does it work?  Is it transforming anything.

What is the Emerging Church?  (the above as pdf handout)


The emerging church is not (yet) a movement.
Glady Ganiel (QUB) calls it an ‘orientation’.
Brian McLaren calls it a ‘conversation’.
Mclaren would also call it a ‘critical community’.

How would you describe the Association of Catholics (ACI)?

Critical Communities_Movements and Institutions (the above as pdf handout)

Both Jesus and Francis did not let the old get in the way of the new, but like all religious geniuses, revealed what the old was saying all along. I find much wisdom in what the contemporary faith seeker Christian Wiman writes: “Faith itself sometimes needs to be stripped of its social and historical encrustations and returned to its first, churchless incarnation in the human heart.”

Francis both named and exemplified that first churchless incarnation of faith in the human heart, but then he somehow also knew that it was the half-knowing organized Church that passed this shared mystery on to him and preserved it for future generations. He had the humility and patience to know that whatever is true is always a shared truth, and only institutions, for all their weaknesses, make this widely shareable, historical, and communal. Francis understood the humility and the patience of incarnation.

Precisely because both Jesus and Francis were “conservatives” in the true sense of the term, they conserved what was worth conserving–the core, the transformative life of the Gospel–and did not let accidentals get in the way, (which are the very things false conservatives usually idolize). Jesus and Francis then ended up looking quite “progressive,” radical, and even dangerous to the status quo.
Faith does not need to push the river. The river is already flowing and we are already in it.
(Richard Rohr)
Usually we prefer to stay with the familiar by treading water. Sometimes we want to swim against the flow, back up river from where we came; back to old securities.  Maybe in this Pentecost season we can trust the flow of the Holy Spirit to take us to new unexplored, unfamiliar places down-stream – if we have the courage to go there.

PRAYER FOR PENTECOST
Most Holy Spirit come, O come in fullness,
And repossess today each waiting heart.
Refresh, restore, give life and beauty,
And all we need these days, to us impart. 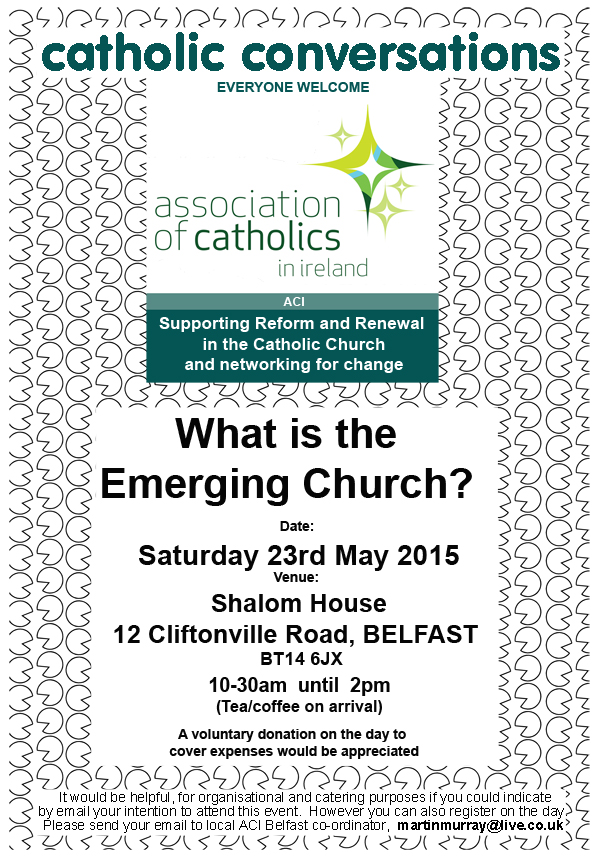