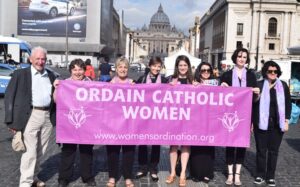 In the immediate aftermath of Pope Francis’ decision to re-examine the question of ordaining women to the office of deacon,  Women’s Ordination Worldwide – an organisation aiming at the ordination of women to the priesthood itself – held its first permitted meeting in Rome in early June, 2016.

WOW organizers had a permit for their demonstration, making it, they say, the first legal demonstration for the group in Rome.  According to The Tablet, WOW leaders were also received respectfully by a Vatican official.

Click here for the full NCR report on the WOW meeting in Rome.

Click here for The Tablet report on a meeting between WOW leaders and a Vatican official.