The Scandal of the 2011 Missal 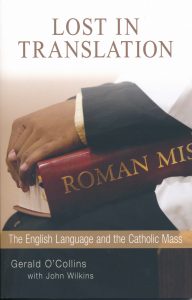 Why exactly did we find ourselves in 2011 suddenly obliged to declare that Jesus as Son of God is ‘consubstantial’ with the Father?  Why had it been supposed that this would clarify what had been meant by ‘of one being with’ the Father – the previous translation of the Creed from the Roman missal, used in Ireland since 1972?

And why in the same prayer were we now saying that ‘For us men and for our salvation’ Jesus had come down from heaven, when ‘for us and our salvation‘ would have left half of the human race untroubled by the possibility that only those with male chromosomes could fully enthuse about that event?

As for terms such as ‘oblation‘, ‘prevenient grace’ and ‘sustenance’ – and flatly ugly and incomprehensible phrases such as ‘merit to become co-heirs‘ – who exactly had supposed that the liturgy had been improved in solemnity and clarity by these?  Had English truly been the vernacular of the person or persons who had delivered these galumphing atrocities?

And why those impossibly long sentences in the Eucharistic Prayers at the centre of the Mass, prayers that so often lead officiating clergy to substitute Eucharistic Prayer II, the most succinct of the four, for any of the other three?

For a truly literate, succinct and quite shocking explanation of these mysteries the curious reader need look no further than ‘Lost in Translation‘ by O’Collins and Wilkins.  In just over 100 pages this (for me indispensable) book tells us not only why we are still trying to pronounce the unpronounceable at Mass, but why we should instead be using a far superior translation of the missal prepared by people who could speak and write English – a translation that was shelved in 1998 in the cause of what looks extraordinarily like Roman pique and amour propre.

The timeline at the foot of this review will summarise the complete dreadful tale – of what can only be interpreted as Roman resentment that Vatican II had given Catholic bishops anywhere the strange notion that they could do without Roman supervision when it came to deciding what wordage was to convey the meaning of the liturgy in Ireland, England, New Zealand, The United States, Australia et al.

It was especially interesting to learn here why such luminaries as Evagrius of Antioch, St Thomas Aquinas and Blessed John Henry Newman had long ago rejected the practice of translating sacred texts in a simple word-for-word sequence, carrying over even the elaborate structure of complex Latin sentences to a language that still lives.  As brevity, simplicity and clarity are exemplified in, for example, Jesus’s rendition of the Lord’s prayer, it is surely to these ideals and to the meaning of the original that the translator needs to be faithful first of all.  Liturgiam Authenticam – the document that in 2001 mandated that translation take place on the basis of a quite contrary word-for-word method – flew in the face of advice given by St Thomas in the 13th century:

“It is . . . the task of the good translator, when translating material dealing with the Catholic faith, to preserve the meaning but to adapt the mode of expression, so that it is in harmony with the idiom of the language into which he is translating.”

Yet this greatest of the medieval theologians was drawing on a far older tradition of paying attention first of all to the sense of the original.  As early as the fourth century Evagrius of Antioch had translated from Greek into Latin a life of St. Antony of Egypt – advising in the preface that “A word-for-word translation from one language into another conceals the meaning and strangles it, even as spreading couch grass [does to] a field of corn… Whatever lack may be in the words, there is none in the meaning. Let others go hunting after letters and syllables; do you seek for the meaning.”

How then could it have happened that in 2011 there would come a translation of the Missal that would flagrantly flout that long-established principle, and inflict the couch grass of ‘oblation’, ‘merit to’ – and the syntax of Cicero – etc upon all of us?  This slim volume cuts to the chase on this admirably.

It does far more than that.  It compares key passages in the 2011 Missal with what we might now be using instead, if the 1998 ICEL translation – the one that had satisfied eleven conferences of anglophone bishops and that is still gathering dust – had been accepted almost two decades ago by the Holy See.  Here, for example are comparable renditions of the prayer over the offerings for the feast of the Immaculate Conception:

In your goodness, Lord, receive the sacrifice of salvation which we offer on the feast of the immaculate conception. We profess in faith that your grace preserved the Virgin Mary from every stain of sin; through her intercession deliver us from all our faults.

Graciously accept the saving sacrifice which we offer you, O Lord, on the Solemnity of the Immaculate Conception of the Blessed Virgin Mary, and grant that, as we profess her, on account of your prevenient grace, to be untouched by any stain of sin, so through her intercession, we may be delivered from all our faults.

To compare just these two passages is to see clearly the impact of the translation protocols at work in the 2011 missal.  Obsequious courtly terms such as ‘graciously’ and ‘solemnity’ – and theological power terms such as ‘prevenient’ must clutter up and extend the verbiage, and the passage must also be one long single sentence.  The normal conventions of punctuation, aimed at the needs of the celebrant who must enunciate the text, have been sacrificed in the cause of pomposity.  Most importantly, the meaning of ‘prevenient’ – perfectly rendered in the 1998 translation – has been lost in the 2011 version.

As I obviously cannot go on here with further such comparisons I can only urge those interested to read this book – to be convinced that the cause of the restoration of the discarded 1998 translation needs the most urgent support.

There is an even more important point made by this book:  that in overruling the anglophone bishops’ conferences on the missal this curial interference of the late 1900s was a flouting of a key principle of Vatican II – that key responsibility for church governance belongs to regional conferences of bishops also.  If the bishops of Ireland, England, Wales etc can so easily capitulate to such flagrant and foolish overreach, what kind of precedent has been set for the future, and what conclusions should those bishops now come to regarding other matters critical to the health of their own congregations – under a jurisdiction inclined (for how long?) towards decentralisation?  Those bishops too should read this book – as a warning to seek the gifts of the Holy Spirit (including fortitude) in any such future assault on Vatican II, the only sure gateway to the future – and to pray for those gifts right now also, in urgent consideration of a missal that clearly should not still be in required use.

I chose carefully the word ‘scandal’ for the title of this article.  A scandal is a ‘stumbling block’ – an obstacle to belief.  This short book explains how and why the 2011 missal became a clear obstacle to the belief that common sense, scholarship and wisdom will always guide the leaders of our church – and makes a formidable case for the conclusion that this travesty needs to be cleared out of everyone’s way as speedily as possible.

1963 – Sacrosanctum Concilium – Vatican II Constitution on the Sacred Liturgy – stipulates that responsibility for determining the liturgy would rest with the Holy See and the bishops of different regions.  It allows translation into the vernacular, to be ‘approved’ by regional bishops, and makes no mention of the need to have such translations ‘recognized’ by the Holy See.

1964 – Sacram Liturgiam – a motu proprio or personal edict by Pope Paul VI prescribes submitting translations to the Holy See for an official recognitio or approval.

1972 – ICEL – (The International Commission on English in the Liturgy) – introduces first vernacular translation of the Roman Missal.  This comes into use in 1973, and remains in use until 2011.

1998 – ICEL wins support for new English translation from eleven English-speaking bishops’ conferences and submits this completed translation to Rome.  It is rejected without discussion by Cardinal Medina Estévez, prefect of the Congregation for Divine Worship and the Discipline of the Sacraments, who also then demands radical changes to ICEL which place it under Vatican control.

2001 – A new document, Liturgiam Authenticam, is issued by the CDW, changing the rules for translation of the liturgy and emphasising the need for word-for-word (rather than meaning-for-meaning) translation.

2011 – The 1972 missal is replaced by a new word-by-word translation prepared by a reconstituted ICEL, gifting English-speaking congregations everywhere with e.g. ‘consubstantial’ in place of ‘of one being’ in the Nicene Creed.  Lengthy sentences following the structure of Ciceronian Latin are declared literally ‘unspeakable’ by some priests – and in Ireland some clergy continue to use the 1972 translation.

2016 – Pope Francis appoints a commission to revisit the rules for translation set out in Liturgiam Authenticam .

2017 – (September) Pope Francis in the motu proprio ‘Magnum Principium’ restores to the conferences of English-speaking bishops the authority to translate the liturgy.