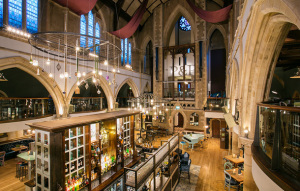 A pub that was once a church – in Nottingham, England

Is this what ‘secularisation’ means for you – the eclipse of religion by hedonism?

There is another perspective on this process – one that sees secular society and idealism in the West still influenced by – and even dependent upon – our Christian heritage.

“It has been more and more widely recognized that liberty, equality, and fraternity are, in fact, among the fruits borne by the biblical and Christian tradition.”  These are the words of  Jean-Marie Cardinal Lustiger, Archbishop of Paris from 1981 to February of 2005 – in an article published in the American journal First Things in October 1997.

If we Irish Christians are to prevent our churches all turning into pubs we will need to be able to put the case – in the pub – for Christianity as the most likely source of inspiration for a national recovery.  To do that we need to bone up on the history of the church’s relationship with the secular state, from the time of the Emperor Constantine in the 300s CE up to the present.

Canadian emeritus professor of history Richard Lebrun presents a masterly summary of this story in his paper ‘Secularization‘.   Click on that link to download it.

Liberty, equality and fraternity are still elusive – and no digital App or bottled enlivener can deliver them.  Once mastered, this paper will allow you go into the pub to explain why our churches must remain as the true source of all real progress!