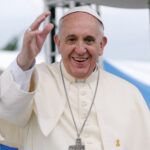 “Still alive, even though some people wanted me to die.” This was Pope Francis’s frank response to an inquiry on his health, on his first foreign trip since his abdominal surgery in early July 2021.

The question came from Slovakian Jesuits – and the pope took a swipe also at opposing media – especially “a large Catholic television channel that has no hesitation in continually speaking ill of the pope.”

Many suppose that he is referring to a US-based right wing Catholic channel calling itself ‘EWTN’ – ‘Eternal Word Television Network’.

“I personally deserve attacks and insults because I am a sinner, but the Church does not deserve them. They are the work of the devil. I have also said this to some of them.”

He was critical also of younger priests who put interest in the Latin Mass above interest in their congregants – calling that “the ideology of going backward”.