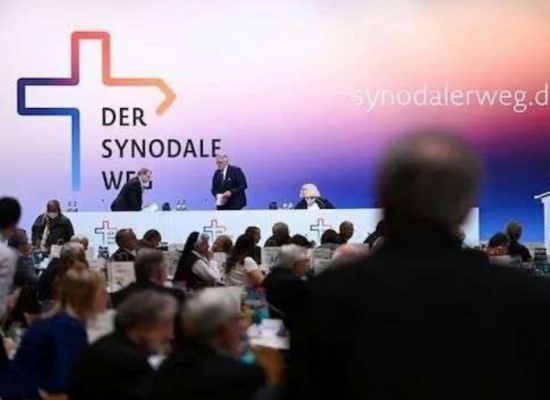 If we are to listen to one another in a synodal Church, then we will have to be more careful lest our use of sloppy language leads us astray.
We all do it!  We use language inaccurately. We use short-hands – for speed or out of laziness. We use words that “work” even when they insult others or falsify the situation.

I grew up in a home where a ball-point pen was a “Biro” and a vacuum-cleaner was a “Hoover” and there was “hoovering” to be done.  These were technical inaccuracies but no one was hurt.  We did not even own a vacuum-cleaner made by the Hoover Company and only occasionally used ball-points made by Biro.

But it is far more significant that we also used language that not only betrayed our biases and prejudices, but which perpetuated and further embedded them every time we used them.  I recall that it was common to refer to “a son” being born, whereas a female infant was a “child” or “merely a child”.  One of my uncles had only daughters and I can recall his brothers and sisters (i.e. my parents and aunts and uncles) lamenting the fact: “Poor Joe, he has only daughters.”  When I first overheard this being said – we children were playing and so it was assumed we did not hear what the adults were talking about – I was not sure why this was such a pity, but I did perceive that it would be much better to have sons rather than children.  Challenging such stereotypes and prejudice is currently dismissed by reactionaries as “wokeness”. However, if you have ever been on the receiving end of prejudice – for your gender, race, nationality, body-shape, disability or sexual orientation – then you are glad when such misuse of language stops.

We have a long history of sloppy language in our Church.  Just take the word “Mass” – which comes from mis-understanding the dismissal – when what we mean is Eucharist.  Think of the word “Church”, which means the assembly of the people.  But most use it for a building.  We then wonder why we often forget that we are a community!  Church is first and foremost a word referring to a human group.  The list goes on … . But if we are to listen to one another in a synodal Church, then we will have to be more careful lest our use of sloppy language leads us astray.

Who is the celebrant?

Here is just one example of how we confuse ourselves and so fail to appreciate our doctrine and what we are doing when we celebrate the liturgy. 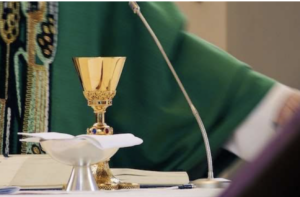 This is a standard image for a celebration of the Eucharist. But is it a false image? Does it give the impression that the celebration is solely the work of the presider? With images like this – taken as tantamount to being images of the Eucharist – are we betraying our theology?

Many people think that at the Eucharist there is a celebrant (i.e. someone in presbyteral orders) and then there are the others – the laity.  This is perhaps understandable.  There must be at least one presbyter, but whether there are 10, or 20, or 200 others does not seem to matter? One less presbyter, then no celebration.  But one less non-presbyter, and the celebration goes ahead.  But that fails to express the reality of what we are doing as a Church, a community that forms the Body of Christ.  We all gather to celebrate and thank the Father in, with and through his Anointed One.  Each of the baptised is a celebrant.  The gathering needs to realise that this is not a few actors and then a large audience. We are wholly celebrant. 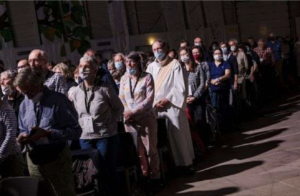 We need to grow in our understanding that the liturgy is the work of the whole priestly
people. (Photo by JEREMY SUYKER for La Croix)

Each person in the assembly celebrates as a member of the holy People of God. The presbyter presides.

Who is the principal celebrant?

Many people are wondering what the outcome of the synodal process will be.  Some seek new structures and some imagine that such are the very things we should be avoiding.  Some in the Vatican, we are told believe they could guide the process to avoid all the awkward questions such as the ordination of women or removing obligatory sacerdotal celibacy.  We are told that the Bishop of Rome wants the focus to be on evangelisation.  The simple problem is that as soon as you ask people about their hopes and fears, they tell you!  If you do not want to have such awkward thoughts brought into discussion, then do not ask people! So what will synodality bring? We do not know.  I suspect that it will disappoint many on both sides.  Then the challenge will be to avoid schism.

One thing that may help avert such a crisis is to think of this process as establishing new ways of relationship. In this, nothing could be more urgent than to move beyond the notion that it is the presbyter’s celebration which people attend. We are all celebrants.  Our community must become wholly celebrant.

Thomas O’Loughlin is a presbyter of the Catholic Diocese of Arundel and Brighton and professor-emeritus of historical theology at the University of Nottingham (UK). His latest book is Eating Together, Becoming One: Taking Up Pope Francis’s Call to Theologians (Liturgical Press, 2019).