The Blasphemy of Christian Imperialism in 2022

“We see many of the Euro-Atlantic countries are actually rejecting their roots, including the Christian values that constitute the basis of Western civilisation. They are denying moral principles and all traditional identities: national, cultural, religious and even sexual. They are implementing policies that equate large families with same-sex partnerships, belief in God with the belief in Satan.”

This total misreading of ‘Western civilisation’ – and the attempted co-opting of Christianity to the cause of a new Russian imperialism – is required reading by the Russian army elite who invaded Ukraine on February 24th 2022.

The words of Vladimir Putin, dictator of Russia in 2021, these are a blasphemous excuse for the ongoing reign of fire on civilians, including children, in Ukraine.

Incredibly in the West, Putin’s nonsense is taken seriously by right-wing nationalists and white supremacists – his western ‘useful idiots’.  These have also decided to learn nothing from the scandal of the Constantinian Christian church/state alliance that is the real wellspring of western atheism and disbelief.

According to some, Putin takes very seriously the fact that another Vladimir – a tenth-century pagan ruler from what is now Ukraine – was the founder of the Russian Orthodox church and of imperial Russia. By virtue of his alliance with Emperor Basil II of Constantinople (the centre of the eastern Roman empire until 1453), Vladimir made Kyiv ‘the mother of all Russian cities’, in Putin’s ideology, in 988.

In the second Christian millennium the rising power of the Russian Czars used the Russian orthodox church as an ally in its subjugation of peoples right across the Asian landmass and westward also, as far as modern Poland.  For Russian imperialists of Putin’s ilk, Russia is a ‘third Rome’.

These historical imaginings and ambitions of Vladimir Putin – and the implicit ‘manifest destiny’ of Russia to restore Christendom – the union of Christian church and state  – have no obvious westward geographical limitation for the future.  If the west is indeed in the grip of Satan, would it not be a holy cause to free it by extending the writ of Moscow and St Petersburg to Calais, Connemara and Mayo? 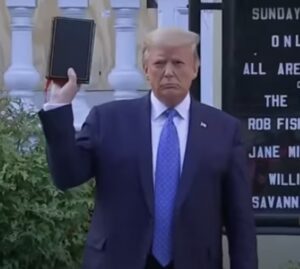 Why not California also, given the evidence for a Satanic presence there – the refusal by so many to acknowledge that the 2020 US election was ‘stolen’ by the Democratic party of Joe Biden from that other sincere flaunter of the Bible – and sincere Putin groupie – Donald Trump?

With Pope Francis set to visit Canada this year – to apologise for what European Christian imperialism did to Canadian ‘first nations’ – all western Christians should take the deepest thought now on the scandal of ‘Christian’ imperialism and the misfortune of too close a connection between church and state.  First offered by the Roman emperor Constantine in 313, state patronage was seen by Christian bishops as an offer they could not refuse – but in too many cases this was the alienation of the cause of freedom and self-determination from the cause of the Gospel, which are truly one and the same.  The Lord who never oppressed anyone was reinterpreted to permit European acquisitive adventurers to oppress whomever they liked.

The Enlightenment  of the 1600s and 1700s –  the western reaction against the church-state nexus – was the origin of western secularism and democracy, but the latter is far more accommodating of the varieties of western Christianity than Putin’s Russia, and is in itself an open space for the recovery of the churches in friendly collaboration

That Putin’s ambition is driven by mere egotism – the biblical and demonic sin of pride – is patently obvious from his own unstinted vengeance against anyone who criticises or opposes him.  The freedom given him to be photographed lighting candles in churches by Orthodox patriarchs is a permit to use Christian iconography to advance a totally lawless political system that far outdoes western capitalism in cronyism, mendacity and corruption.

Just before the second centenary of the French Revolution of 1789 – itself a fruit of the Enlightenment – Pope John Paul II got it crucially right in Le Bourget in France in 1980:

“What wonders the sons and daughters of your nation have done to understand man better, and to express who man really is by proclaiming his inalienable rights. Everyone knows how important the ideas of liberty, equality, and fraternity are in your culture and history. At bottom, these are Christian ideas. I am well aware that those who first put them forward did not have in mind man’s covenant with the Eternal Wisdom. Yet they wanted to do something for man.”

Himself well versed in Putin’s original alma mater, the Soviet secret police –  the KGB – this Polish pope would have given short shrift to the notion of Putin as a Christian hero.  Secular freedoms do not forbid the advance of a Christianity dedicated to the liberty of all and to equal respect for all nations.  All use of Christianity to advance the supremacy of any individual, race or nation is a blasphemy, and none more so than the travesty of history that currently fuels atrocity and murder in Ukraine.

Pope Francis also got it right in Ireland in 2018, when he told us that the love of God became incarnate in Christ Jesus through a family, and will ‘break down every barrier in order to reconcile the world to God and to make us what we were always meant to be: a single human family dwelling together in justice, holiness and peace‘.

It is the world as a single human family at peace – all nations, all races – that dictators always oppose, because they can only thrive on arrogance, supremacism and fratricide.  This was never more obvious than in Vladimir Putin’s invasion of Ukraine in 2022.