In defending Ireland’s system of Catholic schools, Irish Catholic bishops and educationists have failed to promote a realistic shared understanding of religious faith development, post-Christendom – and are now placing an impossible burden upon committed Catholic teachers.

Teachers seeking posts in Catholic schools in Ireland – north or south – commonly hide their lack of religious faith, according to a recent research study – based upon responses from thirty teachers.1

Moreover, according to Professor Eamonn Conway of Mary Immaculate College, Limerick, teachers who do have a religious faith can find it challenging “to acknowledge their religious convictions openly and sincerely, whether in the classroom or the staffroom, … even in schools which purport to have a religious ethos”;2

Come again? In how many Irish Catholic schools do teachers hesitate to reveal their deepest convictions, whatever those convictions might be – even if those convictions are Catholic?  If we don’t know, why don’t we know? Can the principals and RE teachers of those schools not simply be polled?

The awful truth about the real state of affairs in our Catholic schools is that no one knows even why no one knows. Necessary research has been mysteriously shirked for over two decades, despite more than ample alarm signals. All we can know for sure is that the use of the phrase ‘the Catholic ethos’ as a descriptor of the dominant ‘atmosphere’ of nominally Catholic schools is now likely to be delusional and anachronistic, whatever exactly it once described.

The question is important for the following reasons:

What are Catholic bishops and other educationists to do now, in the face of this impossible situation?

First and foremost they need to begin speaking with parrhesia – openness and frankness – on the subject – instead of reverting always to defence of the right of Catholic parents to send their children to ‘faith’ schools.

If, increasingly, the parents of teenagers are themselves no longer regular churchgoers there is no reason whatever to presume that Catholic faith development is a priority for many of them. Moreover, the obvious shirking of research into such questions cannot build confidence that those who offer this defence are not themselves being disingenuous.

Far more helpful would be a frank admission that in a vastly changed cultural climate, and in the wake of decades of church scandal, it is simply unreasonable to expect young Irish adults to be natural church goers, or even into private prayer, whatever their schooling.

Was it wise, ever, to place the burden of faith development primarily on schools and teachers anyway? Was that not yet another clerical betrayal of the Irish Catholic family, by implying through the abandonment of frank dialogue decades ago that parents could not have greater competence for the role, and that schools could be relied upon in the absence of that dialogue?

Was it not also a complete denial of what is known about the typical pattern of religious faith development over a lifetime?

The Typical Progress of Religious Faith 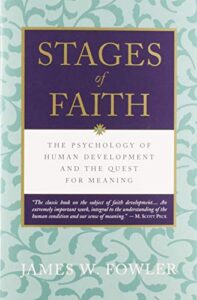 The most widely influential model of religious faith development predicts that childhood faith in adult mentors and institutions will undergo challenge in early adulthood, initiating a stage of inner conflict and then a decision to take responsibility for one’s own ‘faith journey’4.

What greater challenge could ever have been posed to Irish Catholic faith in the church as an institution than the revelation that the church’s own supreme clerical teachers had hidden the reality of clerical sexual abuse of children, as a matter of policy, for a still unknown span of the church’s 2000 year history?

Was the so-called ‘Catholic ethos’ therefore essentially an ethos of mystification on the part of clergy, and of deference to clerical authority on the part of lay people – an ethos of compliance with an institution more than trust in the tenets of the Creed? The fact that in my own three-decade experience as a teacher in Catholic schools until 1996 the phrase was never explicitly ‘unpacked’ makes that more than plausible.

If that is what ‘the Catholic ethos’ essentially was, why should we even hope that it still applies in Catholic schools? Mustn’t Catholic faith now move decisively beyond deference to authority if it is to be capable of ‘mission’?

What Kind of Faith?

This raises starkly a critical question: what kind of Christian faith, exactly, do members of the Irish Catholic Bishops Conference still expect adult observant Catholics to have these times – in the wake of events since 1992?  To be thoroughly reliable and ‘orthodox’ mustn’t Catholic faith be in the Trinity now, rather than in the clerical Catholic institution?

The obvious fact that for whole lifetimes such questions have never been welcomed and addressed in Ireland, in open dialogue between bishops, clergy and people – should offer perspective on the question of what ‘faith development’ in children and teenagers should realistically be expected of schools.

Why, even yet, is ‘faith’ always spoken of by Irish bishops without nuance or qualification, as though the meaning of the word must be as fixed, static, agreed and obvious as the meanings of the words ‘cat’, ‘foot’ or ‘marmalade’? Are we still supposed to be thinking of faith as a simple ‘on’ switch that is thrown in childhood and ideally never afterwards switched to ‘off’ or even to ‘maybe’?

Synodality and Parrhesia – and Faith

If Synodality is truly to move the Irish church towards mission why still do our church leaders duck the challenge of parrhesia – frank and honest acknowledgement of the inadequacy of our school-reliant model of faith formation – and especially the challenge of admitting that faith itself must necessarily be deeply affected and modified by institutional failure?

Who does it help to delay this very necessary honesty? Certainly not the Catholic teachers who have been so prominent in the synodal response so far. Knowing well now that we need a grown-up model of Christian faith development they are way past the point of shouldering responsibility for church leadership inadequacy.

Having failed to show courageous leadership for decades it is now time for our bishops to own up, and to recognise the difficulty of developing a grown-up Catholic faith within a system still focused unwisely upon children – and completely inarticulate on the issue of faith development itself.