The church is more than just the pope 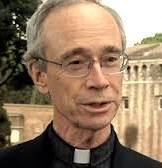 Thomas Reese SJ urges Catholic lay people everywhere to use the window of opportunity offered by the present papacy to end their passive role in the church.

“…There will be no ‘Francis effect’ if when people return to the church they do not meet someone like Francis at their parish. Going to confession today is like playing Russian roulette. You don’t know whether you will meet the compassionate Jesus or some angry, judgmental crank who thinks it is his job to tell people how bad they are. This is a form of abuse about which the church has done nothing….”

Click here to open another window for this important article on the site of the US National Catholic Reporter.