The Cross is the Lynching Tree 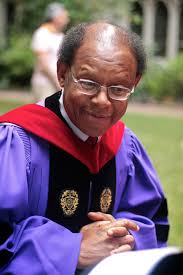 “The cross stands at the center of the Christian faith of African-Americans because Jesus’ suffering was similar to their American experience. Just as Jesus Christ was crucified, so were blacks lynched. In the American experience, the cross is the lynching tree.”

So said the African American theologian, James H Cone, in an interview in ‘America‘ in 2006.

He could not have foreseen then the particular instance of the killing of George Floyd in 2020 in Minneapolis, but his theology predicted the event. He clearly saw the pattern of all such events. White supremacism always led, and still leads  inevitably in the US, to the crucifixion of African Americans.

And President Trump’s use of the bible as a prop for a photo opportunity outside the White House on Monday June 1st – in the wake of his total failure to grasp the meaning and the horror of George Floyd’s death – was a chilling reminder of the blindness of too much white US Christianity to the true meaning of the cross.

How much more evidence do we white Christians need of the connection between the political game of ‘who’s the greatest?’ and the sufferings of ethnic minorities in the midst of far too many majority-white communities?

It is estimated that in the post American Civil War period stretching from 1865-1950 a total of 5,000 African Americans died by lynching. The humiliation of defeat by Union forces in that Civil War seems to have combined with ignorance and poverty to have created a volatile and vengeful situation of enormous danger for American black men – as fictionalised in, for example, To Kill a Mockingbird  (1960). Those lynchings are now commemorated in the Legacy Museum in Montgomery, Alabama.

James Cone nevertheless remarked upon the total silence of white Christian churchmen and theologians throughout the worst period of the lynchings of blacks on this obvious parallel between those events and the crucifixion of Jesus.  “White theologians … interpreted Jesus’ cross without any reference to the suffering blacks in their midst. It is amazing to me that few theologians have even mentioned lynching in connection with the cross or said a public word against it when it was so widespread. During the peak of the so-called lynching bees, between 1880 and 1930, there was no public opposition in the writings of prominent Protestant and Catholic theologians.”

The same was unfortunately true of white Christian leaders, including Catholic bishops. As a minority white community in a society founded by a mostly Protestant overclass, European Catholics had divided mostly on north-south lines on the issue of American slavery – with some southern Catholic bishops both owning and defending slavery.  If Cone’s research is correct no Catholic bishop ever remarked publicly in that period 1865-1950 on the obvious parallel between lynchings of African Americans – often on the most untrustworthy evidence – and the crucifixion of Jesus.

[See e.g.’A House Divided: the American Bishops and the Civil War‘ on the Patheos website.]

However, Cone’s theology of the cross is now powerfully supported by the anthropology of the Catholic academic René Girard, for whom the Gospel story is the clearest revealing in all literature of the historical pattern of scapegoating as a means of stabilising a society in crisis. Because we humans unconsciously absorb one another’s acquisitive desires we inevitably fall into conflict and crisis, and are eventually in deep danger of all-out internal social disorder and self-destruction.  At that point those with furthest to fall will then resolve their differences by victimising some identifiable ‘villain’ or minority. We literally do not know what we do when we combine to agree that this individual or minority is to blame for everything, and then get busy with lynching or expulsion.

Never has that pattern been more vividly re-exposed than in recent days in the USA.  But will we recognise it well enough now to remember it always?