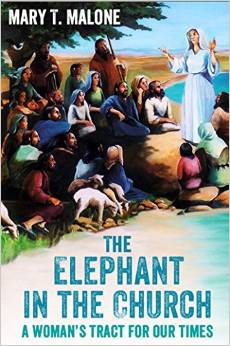 Women are the elephant in the Church. They have been perpetually silenced, ignored and discounted. They are not required to make any contribution to the Church, except for obedience. In every public ecclesiastical event, such as the election of a Pope, it is glaringly obvious that women are entirely irrelevant. The silencing of women was initiated by Paul around the year 55 ce and the theological explanation for this silencing that women were created second and sinned first appears around 85 ce in the Letter to Timothy. This phrase ‘created second, sinned first’ has continued almost as a mantra down through the centuries and has resulted in what is, to all intents and purposes, a men s church. This book explores what the author terms ‘Women Christianity’ from a historical perspective, following the story from biblical times to the present day. If the Christian Church is to survive, it is clear that it must be a more inclusive Church where the gifts of women and men are equally recognised, and where the whole notion of ordination has to be revamped from the bottom up.

About the Author
Mary T. Malone retired home to Ireland in 1997 after almost forty years in Canada where she taught in Toronto’s St Augustine s Seminary and in the University of St Jerome s, the Catholic College on the campus of the University of Waterloo. Since returning to Ireland, Mary has written a trilogy on Women & Christianity, 2000, 2001, 2003, and Praying with the Women Mystics, 2006, all for The Columba Press, as well as several articles. Mary lives in her home county of Wexford.