Following the 2-1 majority in Favour of a YES vote in the Referendum for Marriage Equality for Same-sex couples in late May 2015, Archbishop Diarmuid Martin of the Dublin Diocese spoke of the need for a Reality Check by the Church in regard to the looming disparity highlighted by young and older people alike who favoured YES against the Catholic Church’s NO.  Society has become more secular in recent decades here in Ireland.  The Catholic Church speaks of evangelizing the young people who leave Church attendance behind almost as soon as they leave Primary School and also following the Sacrament of Confirmation which can also coincide with Primary 6th Class. 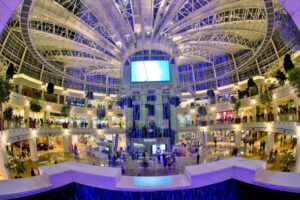 Shopping Mall as Temple of Mammon

In the past few decades it is plain to be seen that Shopping Centres as Temples to Mammon have a far greater attendance –voluntary and willing, than Churches but then the emphasis is different. Self indulgence and instant gratification are highlighted as versus self denial and delayed gratification i.e. heavenly reward at the end of life when eternal life will be achieved. The atmosphere is different also as for the most part Shopping Centres are family friendly/customer friendly. Families can spend as much time as they need to take and spend as much money as they can afford on family and on themselves and their homes. No one, no matter what their age, class, colour, creed or sexual orientation is excluded or made to feel unwelcome unless of course someone is a known danger to the physical safety and wellbeing of the other shoppers or browsers. The Clergy must realise that the young people that the Church wishes to evangelise are more frequent attenders at the “Mall” hanging out with their peers, listening to music on their earphones and scrolling on their iphones, texting and tweeting and in this ear closed off way show an in-difference and disconnection towards whatever is outside their technologically glutted lives. Yet they are there to show solidarity with their peers in moments of grief and times of tragedy. 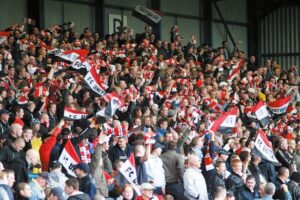 Sport Stadia have also become Cathedrals to Leisure in a different sense i.e. leisure in so far as such stadia are again willingly and voluntarily filled by supporting fans of every age, class, colour, creed and sexual orientation of the teams playing against each other. The flag waving, singing, cheering as well as the booing has a sense of unity and solidarity about it that permeates the atmosphere of the stadium. Young people can visit Shopping Centres-Cathedrals to Mammon and buy the latest version of their Clubs sports shirts, shoes, scarf and hat etc. all necessary to show their support for their team in the vast and varied Sports Stadia –Cathedrals of Leisure. No one can contemplate losing, but even so all the gear has been bought as well as the necessary tickets. What is of ultimate importance whether their team wins or loses is enjoyment of the game and the after-game analysis which is just as important to the fans also shared over six-packs of well known brands of alcohol. That is real life to them and a million miles away from what the Church considers real life i.e. the life of Christ. 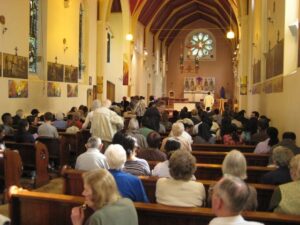 Compare that with attendance at Church where the Sunday Suit/Costume is no longer required as de rigueur, no tickets are needed for entry at the Church door on Sunday or at any other time. At least not a ticket to be handed up at the Church door as such but unlike what I have outlined above there is an un-welcomeness for particular groups of people. There is no after Mass analysis of the Readings, Psalm and Gospel at least not as people are leaving the Church and going towards their cars afterwards. I wonder why that is not encouraged! We are as Baptised Catholics supposed to “go out to the whole world and proclaim the Good News to all creation” (Mark 16:15). There is a major disparity between who is considered worthy to enter Church and who is not considered worthy to enter Church and receive the Holy Eucharist. Has the Catholic Church become more like the Jewish Religious Establishment in Jesus’ time and whom He challenged by saying to them “You tie up heavy burdens and lay them on men’s/women’s shoulders but will not lift a finger to help them” (Matthew 23:4). Very many of the issues that will be brought to the table for discussion during the Synod on Marriage and the Family are problematic because the Catholic Church has become too legalistic and parsimonious in regard to who is considered eligible and ineligible to attend Mass and receive the Holy Eucharist.
How can the Catholic Church set about bringing back young people to regular Church attendance? By really welcoming the Sinner and the Stranger. At the moment in Church thinking there is a major divide between the welcome that the Church law abiding sinner receives and the non-welcome the Church Non-law abiding sinner receives -forced instead to live like lepers outside the fold and isolated from their Church even though they still live in the parish community and are actively involved in it also.

‘I did not come to call the virtuous but sinners!’

How can the Catholic Church call itself family friendly and welcoming if some members of the families who attend Mass are not welcome to participate and be fully incorporated into the ministries in the Church. Putting in Crying Rooms for young families who bring their babies and toddlers is only a Baby Step on the road to becoming really Family Friendly at the other end of the age grouping i.e. teenagers, young people and older people who are gay or think they are, those who are in broken marriages or in second relationships, divorced and re-married etc. and who need to be accommodated and welcomed also. The prevailing attitude of Them v Us will have to be abolished because the one thing we all have in common is that we are sinners and Jesus himself said “I did not come to call the virtuous but sinners” (Matthew9:13). None of us are as virtuous as we would like to think we are. So let this be first on the list of the Reality Check that the Catholic Church in the 21st Century needs to address. If, as had been reported in the media, that not only young people but grandparents and parents also voted YES because of their family members who are gay and in doing so showed solidarity with them then that shows a greater showing of Christianity than the institutional church does show at the moment. It has been a long time since the Institutional Church showed itself to be in Solidarity with the laity mainly because in the Tridentine era and the mindset of that time that still exists, the Institutional Church took it for granted that it was the laity who should be in Solidarity with the Church. Those days are gone and that should be one of the first things to be realised.

Many YES voters consider themselves Catholics

What must be taken into account is that those who voted YES in the Marriage Equality Referendum will still consider themselves as Catholic in their faith and conviction in regard to the Sacrament of Marriage and all other Sacraments and articles of faith. In Jesus’ time even though he was radically reforming the attitudes of the Jewish people especially in regard to the poor, the dispossessed, the widow and orphan and the leprous and moral outcasts he did not dismantle the Ten Commandments as laid down by God and passed on through Moses in the Old Testament i.e.”For truly I say to you until heaven and earth pass away, not the smallest letter or stroke shall pass from the Law until it is all accomplished” (Matthew5:18) in order to do so. Instead he wanted the Jewish Religious Establishment to become more pastorally caring of those whom they had considered unworthy of salvation and whom they had ignored and excluded. Equally so I do not think that those who voted YES in the Marriage Equality Referendum were consciously annulling the definition of Traditional Marriage between a man and a woman in an either/or situation but rather extending the definition to also/and in a more inclusive way especially from a civil rights perspective. The Church has to reform its thinking to once again include the Mind of Christ and the Way of Jesus which have been squeezed out pastorally by the way of man and the legalistic Church except in the Celebration of the Eucharist which is a liturgical rite.

The world that our young people are part of is a far more diverse world than the world that many of our clergy grew up in. There has been a major cultural shift in recent decades and as the young people mix and match with fellow students, neighbours and friends of different cultural backgrounds they have a much more open and inclusive attitude which contrasts sharply with the more insular attitudes that many of the clergy still wish to hold on to. Young people do not live in the valley of the squinting windows and they do not possess the mindset that accompanied that era either. They are much more likely to be found squinting at the window of their iphones and ipads with a far more global village attitude. Yet young people are not totally oblivious to God and religious faith. Jesus and Our Lady will still have prayer petitions made to them and candles will be lit before their shrines if young people are worried about something or have an exam to pass or a job interview that they wish to succeed at.