The Real Root of Inequality? 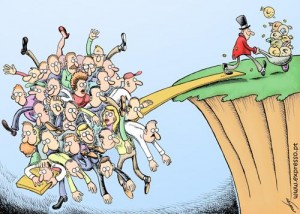 “Rising income inequality troubles Americans,” wrote Shamus Khan in the New York Times (Dec 14, 2013). That’s why the paper commissioned a series on the very same issue, calling it “The Great Divide“. What truly seems to wind up Wall Street is the fear that capitalism and the American Dream may even be facing eventual divorce.

For some a dread prospect looms:  that Karl Marx might have been right in predicting that capitalism leads inevitably to such vast income inequality that middle-class markets for ‘fetishised’ commodities actually dry up.

Even as a student in the 1960s I wondered why a society founded on the Enlightenment ideal of social equality had become so vastly unequal in less than two centuries – so this recent American pondering on the same problem was fascinating stuff. So was the prediction of the touring French aristocrat Alexis de Tocqueville, commenting on the same America as early as 1835: “But men will never establish any equality with which they can be contented”. American discontent, he argued, must be never-ending: based as it is upon the desire to ‘get ahead’ it must always be mostly frustrated by the very same desire in others. In the rural backwaters of the ‘old world’ (Europe) De Tocqueville knew of peasants who were far poorer than most Americans ‘yet their countenances are generally placid and their spirits light‘ – simply because, he argued, they didn’t have that particular American discontent. 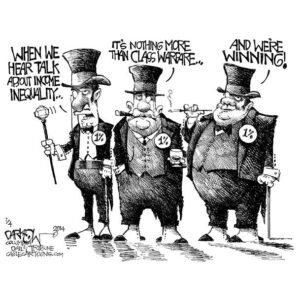 Given the Enlightenment origins of the science of Psychology, it is remarkable how little attention has been paid by that discipline to the roots of social inequality. ‘Social Dominance Theory’ claims to explain how and why dominant groups maintain themselves – and there are very persuasive theories also on why individuals tend to join groups to begin with. However, as far as I can see from a month’s scanning of research abstracts, there is as yet no overarching psychological theory of today’s out-of-control social inequality that could withstand historical validation also.This might yet emerge, however, from a more closely focused and long-term study of our human need to secure, maintain and enhance our self-esteem. The ‘Self-Uncertainty’ theory of why we tend to join groups is that the latter reduce our tendency to be uncertain in early life about both ourselves and our world. Successfully serving the interests of a dominant group brings positive feedback and acclaim from its other members – reassurance that we have made the right move, a kind of ‘uncertainty damping’.

Making our group’s worldview our own also tends to lessen our uncertainty about everything else. Today’s economically dominant groups must surely flatter their members to an extent that would beggar Croesus, and convince them that they are ‘righter’ than anyone has ever been.

In 2004 the philosopher Alain deBotton put a closer focus on a particular variety of human uncertainty – our uncertainty about our own value. Calling this complaint ‘status anxiety’ he argued that it lies at the root of all social snobbery, and even at the root of such modern malaises as depression and addiction. In a supposedly ‘meritocratic’ society those who don’t make it are lacking – by implication – in merit itself – and are therefore denied even the right to value themselves. This makes them far less fortunate than de Tocqueville’s happy peasants, who had no reason to suppose in the 1830s that the aristocrat or bourgeois in the biggest house did not depend primarily – even at table – on the labour of those who lived in the smallest.

The reason this should interest all Christians is that de Botton argues persuasively that what he calls ‘status anxiety’ is what the Gospels call worldliness – the very moral challenge that Jesus himself claimed above all to have bested. “In the world you will have tribulation; but be of good cheer, I have overcome the world.” (John 16:33)

In expounding the divinity of Jesus, how come Christian preaching and theology has placed so little emphasis upon this claim, emphasising instead Jesus’ celibacy as proof of his freedom from sin? Why exactly is it that Yves Congar’s summary still holds valid: “In the Catholic Church it has often seemed that the sin of the flesh was the only sin, and obedience the only virtue?” Why have I (worshipping in Ireland) never yet heard a homilist unpack worldliness as status-seeking – or indict snobbery either – not even in the wake of revelations of devastating abuse of the poorest in Ireland’s Catholic-run 20th century institutions? 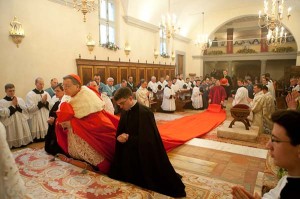 “Which of us is the greatest?” asked even the apostles. The last pope may well have been unshipped by the same fixation among his subordinates. His successor, thankfully, seems to be not only totally free of status anxiety but ready to make it a major target. In Evangelii Gaudium (93) Francis zeroes in on Jesus’ indictment of that complaint: “How can you believe, who receive glory from one another and do not seek the glory that comes from the only God?” (Jn 5:44)

This opposition of faith and status-seeking surely needs to be carefully studied by those preparing a ‘New Evangelisation’ now – and seeking a sharper focus on the relevance of Christianity to the problems that secularism hasn’t solved. Such eminent spiritual guides as Richard Rohr OFM have been persuasively arguing for years that all of us need to go on a spiritual journey that has no shortcut – not even through intensive religious instruction – to a mature faith. It is because we are uncertain of our value that even religious professionals can be ambitious for religious acclaim from one another – the origin surely of diseases as various as celebrity evangelism, Vatican careerism, clericalism and what we Irish call ‘lay popery’. To all of this Francis gives the title ‘spiritual worldliness’. It is usually only a deep personal crisis of some kind that can – through heartfelt prayer – shake us free of the delusion that our value depends upon what others think of us – facing us with the stark reality that those others tend to have exactly the same unease.

It was surely the clerical Catholic church’s thirteen-century association at its summit with the ‘movers and shakers’ of the secular world that led to its current crisis of credibility – its eye-shutting at status seeking and its sex-fixated moral theology. The threat of ‘aggressive secularism’ will never be faced down by mere intellectual rivalry with it. We all need to become aware of our tendency to contribute to inequality by engaging in any kind of grim competition – and to establish by our own ‘self-dying’ that the roots of modern inequality lie in a problem targeted squarely in the Gospel.

So the Franciscan revolution in Rome is potentially far more than a change of style. It is visibly a return to the most important moral critique of the Christian tradition – the assault on self-promotion. The greatest game afoot now is surely to beat anti-religious secularism, joyfully, to the only solution to the global problem of unsustainable inequality – a deeper, thoroughly actuated, spiritual wisdom.

I think the picture accompanying this article of the bishop with the long train illustrates well both status seeking as the ‘Real Root of Inequality’ in the secular as in the religious sphere, and the point made in the final paragraph, ‘the Franciscan revolution in Rome is potentially far more than a change of style . It is visibly a return to the most important critique of the Christian tradition, the assault on self-promotion’.

What catches my attention in the picture is not only the crimson clad bishop but also the congregation imprisoned in the pews by his long crimson train.

I believe that if in every such instance all members of the congregation were to get up out of their train imprisonment in the pews and walk out of the church, the bishop/cardinal would soon discover that status seeking doesn’t work. The congregational ‘assault on self promotion’ would undoubtedly contribute to withdrawing from the main ‘Root of Inequality’ the soil on which it depends for its survival and flourishing.

Such a congregational response would look extremely disrespectful, disrespectful indeed, either of the bishop as Church leader or of his apparent fall into the extremes of status seeking, so foreign to the value system, teaching and way of life of the historic and risen Jesus, the Church’s Founder.

The present crisis in the Church is leading many Church members, not lay but baptised, to take the initiative by coming together in prayer/action groups, seeking a united rather than a divided Church, a People of God Community of Faith united with each other and with our Church leaders, a return to the Kingdom of God project of the historic Jesus.