Time for Public Theology – Johnston McMaster of the ISE 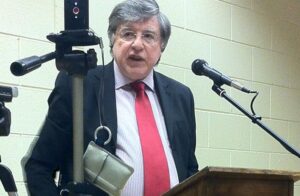 Dr Johnston McMaster of the Irish School of Ecumenics

We are living in a changing world. The West is in decline and the East is on the rise. The history of the West has been dominated by the Christian religion. WWI marked the end of Christendom. Imperial Christianity crashed with the Imperial powers that went to war in 1914. The secularisation thesis gained prominence for a while but this has begun to break down and religion, which was supposed to be private, has returned to the public square. We now live in secular states, pluralist democracies, where church and state are separate and faith and politics have to work out a very different relationship.

Faith for too long has been confined to the life of the soul, the private, personal or sexual morality, family matters and the life of the church. Public theology is about God-talk, values and ethics, in the context of the public, social, economic and environmental realities of life in the world. It is publically applied social ethics, the faith community making its voice known with all the other voices in the public square. It will mean a radically new way of reading, reflecting and doing theology and ethics. Some inter-church Fora are already doing this, Omagh, Fermanagh and Ballymena, through conversations and discourse around democracy, equality and common good. This is deliberative democracy and deliberative theology at work.

THE ‘PUBLIC’ IN PUBLIC THEOLOGY

The world around us is changing and to develop public theology in the 21st century is to take seriously faith and ethics as applied to public questions of politics, economics, environment, globalisation, technology, poverty, war, violence, common good and planetary flourishing. This is the ‘public’ in public theology. So too are the eight themes identified by the Ethical and Shared Remembering Programme for 1917-1922. These are Historical, Patriarchy, Religious, Political, Militaristic, Cultural, and two ‘remembering the future’ themes, Common Good and Building Democracy.

PUBLIC THEOLOGY AND THE HERMENEUTICAL SHIFT

Hermeneutics are about our principles of interpretation, the ways in which we interpret our foundational texts. There are in existence at least eighteen different Christian models of interpretation. To respond theologically and ethically to public and social life will require a reading of sacred writings in context, the socio-political context of then and the sociopolitical context of now, allowing the two worlds to connect and interact. It will also mean taking seriously the shadow of empire in which the Bible from Genesis to Revelation was written. The Bible is resistance literature, as much a social, political text as it is religious. This approach is key to doing public theology and social ethics in the 21st century.

Public theology will require a new anthropology, the question, what does it mean to be human? It means the primacy of the human, the heart of which is love, compassion, justice and non-violence.

Public theology will require a new Christology, which is the question, who is Jesus Christ for us today? This will mean a human Christology, Jesus in his Jewishness, Jesus not as male but as the Christian Testament points up, Jesus as the human. At the heart of the human is the divine. The human is the vehicle of the sacred. The Word did become flesh!
In a context of war, violence and militarism we need a Christology of peace. Jesus disclosed, not a warrior God, but a non-violent God. A Christology of peace might begin by reading Luke’s Gospel, and in the Nativity celebrations, the story of shepherds and angels with its subversive Roman imperial vocabulary.

Public theology needs to be grasped by the social Trinity, the metaphor of the incomprehensible mystery of God. The Cappadocian theologians used the word perechorises, our word choreography. We are drawn into the relational dance of love, mutuality, reciprocity, the dynamism of love and energising movement. The Trinity is the metaphor for community, the relational, interrelational, interdependent, community of harmony in diversity and diversity in harmony.

Ethical Foundations are found in the core biblical idea of covenant which is essentially about neighbourliness. Covenant is a social vision of community in solidarity and committed to the wellbeing, common good and flourishing of the whole human and environmental community of life. Covenant is also a vision of just economics. The core values are social justice, social solidarity, right relationships based on justice and peace or shalom, total human and environmental wellbeing.

DOING PUBLIC THEOLOGY IN THE MIDST OF OTHERS

An introductory course on public theology will be held in Drumalis Retreat and Conference Centre, beginning in January 2018 and for six sessions on a series of Sunday afternoons, ending in May. The above is a very brief overview of the introductory course. The Community Council funding will also enable the course content or inputs to be available on podcast and as publication to enable wider use by groups at a later stage. Public theology will hopefully be developed at three levels, all interelated, the academy, church and community. Fora members are encouraged to engage with public theology, either through signing up for the Drumalis course, and /or a local focus through seminars, workshops or courses. Doing public theology in the 21st century is the challenge of our time. It may well be that the future is public theology.

Click here for details of Drumalis course in ‘Public Theology’.

The Irish School of Ecumenics was founded in 1970 by Fr Michael Hurley SJ.  Its motto is Floreat ut Pereat, ‘May it flourish in order to perish’ (Tagadh Bláth Chun go dTagadh Feo). The motto goes hand-in-hand with the logo of ISE, an ear of wheat.

A profile of Dr Johnston McMaster can be found here.