Treatment of Asylum Seekers: a letter from Nessan Vaughan 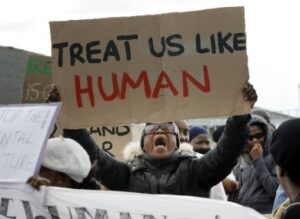 Here is a letter from an ACI member, Nessan Vaughan, which was originally published in the Irish Times. We thank Nessan for highlighting this social justice issue and forwarding the article for publication on our website.

In light of all the recent exposures of child abuse in institutional care, it is particularly reprehensible that this state should continue to confine Asylum Seekers to several years in direct provision accommodation.

It is an affront to their dignity, arguably a denial of their human rights and, at the very least, it seriously falls short of the standards of treatment consistent with Christian charity. That one in three Asylum Seekers has been waiting at least five years for a final decision on their application is a scandal. Many of these people consider themselves Irish as they have spent a significant portion of their lives here. This State has a moral obligation to allow them stay here on a permanent basis.

What are the chances of a future government setting up an enquiry into the treatment of Asylum Seekers in this state covering recent years?

It is time was actively pursued by Amnesty International, the Human Rights Commission, political parties, voluntary organisations and all who are concerned with protecting some of the most vulnerable people who have been consigned to the margins of our society.