US Bishop McElroy warns against single-issue voting in election year 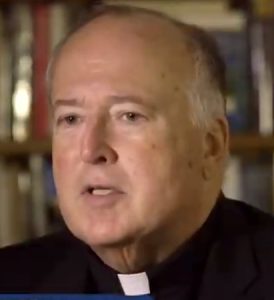 “There is no mandate in universal Catholic social teaching that gives a categorical priority to either of these issues [climate change or abortion]  as uniquely determinative of the common good.”

So argues Bishop Robert W McElroy of San Diego, USA, in a stern warning against political polarisation and the making of any one issue ‘pre-eminent’ in a bitterly contested election year in the US.

Bishop McElroy is one of two US bishops to take issue with a Nov 2019 letter from the US bishops conference, identifying abortion as their ‘preeminent priority’.

Identifying ten important issues for Catholic social conscience at this time, Bishop McElroy argues that both abortion and climate change are critically important but that to make either of them preeminent is to risk polarising US Catholics along politically partisan lines.  He continues:

“There is no mandate in universal Catholic social teaching that gives a categorical priority to either of these issues as uniquely determinative of the common good.  The death toll from abortion is more immediate, but the long-term death toll from unchecked climate change is larger and threatens the very future of humanity.”

He lists the following eight other US social issues as also in need of weighing when voting:

Also important he argues, is the perceived competence and character of candidates. Voters need to bear in  mind that a candidate who proclaims adherence to any perceived priority may well be incapable of acting on it, even if elected.

“We are called in our lives as citizens and believers to be missionaries of dialogue and civility in a moment that values neither. And this requires deep spiritual reflection, courage and judgement. It demands a Christlike dedication to seeking the truth no matter where it may lie, and defining our politics and voting in the light of the Gospel.”

Rejecting the argument that the virtue of prudence should not determine a voting choice, Bishop McElroy writes:

“As the Catechism notes, “With the help of this virtue (prudence), we apply moral principles to particular cases without error and overcome doubts about the good to achieve and the evil to be avoided.

“Prudential judgment is not a secondary or deficient mode of discernment in the Christian conscience. It is the primary mode.

“This is certainly true in voting for candidates for public office. The constellation of substantial moral elements that are relevant to deciding which candidate is most likely to advance the common good during her time in office can only be morally comprehended through the virtue of prudence. There cannot be faith-filled Catholic voting without the virtue of prudence, exercised within the sanctity of well-formed conscience.”

To read Bishop McElroy’s entire address – click the title, below.

Conscience, Candidates and Discipleship in Voting