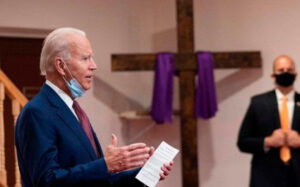 According to at least one polling service, Donald Trump had lost the support of a majority of white US Catholics by September 2020, an electoral  trend that had begun at least as early as April, when the Covid 19 virus was impacting heavily on voters in many states.

Harvard-sponsored ‘Data for Progress’ reported that white Catholic support for Trump may have fallen from 56% to 47% in the period April-Sept. 2020.

Separately the conservative and pro-Trump Catholic news service EWTN has reported that Catholics generally favoured Joe Biden by 12% by Sept. 2020, for the presidential election on November 3rd, 2020.  This reflects an ongoing demographic shift towards a non-white overall majority in the US – a large part of which will be Latino and Catholic.

These polls preceded the news that in early October 2020 President Trump had contracted the dangerous Covid 19 virus – news that was greeted with alarm but no surprise by many medics critical of Trump’s evocation of American freedoms and rights – in refusing to either wear or encourage the wearing of face masks to hinder the spreading of the virus by aerosol transmission – and in often flouting social distancing rules at his campaigning rallies.

Also by September a number of US Catholic bishops and other commentators had advised Catholics of reasons to question the validity of the incumbent president’s credentials for being considered ‘pro-life’ – given the often fatal impact of the Covid 19 virus on many of the US poor and elderly, and his perceived mishandling of racial tensions that grew especially dangerous in early June 2020.

Joe Biden is a professing and practising Catholic – but is strongly criticised by many US Catholics for his ‘pro choice’ stance on the criminalisation of abortion.  Donald Trump is not a frequent church goer, but has been embraced by evangelical Christians and many conservative Catholics for his proclaimed pro-life political stance.