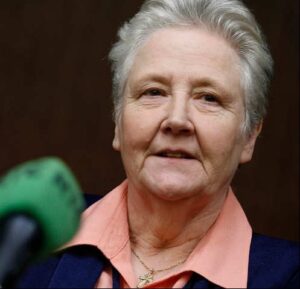 ‘We are Church Ireland’ is calling on Pope Francis during his forthcoming visit to Ireland in 2018 for the World Meeting of Families to meet with Marie Collins to affirm his continuing support for that Commission and to show his appreciation of her valuable work over three years on the Vatican Commission for the Protection of Minors.

In spite of her important role in this Commission Pope Francis has not personally met her during her time in Rome other than a brief passing handshake.

‘We are Church Ireland’ has already written to Pope Francis, the Archbishop of Dublin and the Papal Nuncio requesting such a meeting but to date the only response received has been from the Papal Nuncio.

‘It is most important that Pope Francis meet with Marie Collins during his Irish visit to confirm his full support for the continuing work of the Commission for the Protection of Minors and to thank her for her valuable contribution to that Commission’ stated Brendan Butler of ‘We are Church Ireland.’

Brendan Butler, We are Church spokesperson.

In the expectation that Pope Francis will meet with at least one Irish family impacted by past clerical abuse on his visit to Ireland in August 2018, The Association of Catholics in Ireland strongly supports this call from We Are Church Ireland – for Marie Collins to be included in any such process of healing and reconciliation. Important work by the Pontifical Commission for the Protection of Minors remains unfinished – especially in regard to ensuring the compliance of all bishops with the church’s safeguarding rules, and with local civil law. The inclusion of a meeting with Marie Collins in the pope’s Irish itinerary would be a logical symbolic step in that process of ongoing child protection, and of healing broken bonds of trust between Irish families and the church’s leadership structures.