The ‘war’ against Pope Francis: where do Irish bishops stand? 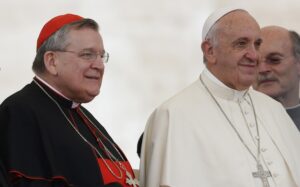 So wrote Andrew Brown in the Manchester Guardian on Friday October 27th, 2017 – in an extended attempt to explain what he calls ‘The war against Pope Francis’. Brown calls the first of these camps the ‘introverts’, and the second the ‘extroverts’. Placing, for example, Cardinal Raymond Burke in the first camp, and Pope Francis in the second, Brown implies that the pope believes that the world must set the agenda for the church. Though Brown appears to be sympathetic to the pope, no description of the situation could better serve the cause of Cardinal Burke.  For that school of thought ‘the world’ is the church’s greatest threat – an advocate of ‘anything goes’ rather than the teachings of Jesus.  Cardinal Burke’s most outrageous supporters see Francis as a heretic because they too believe that ‘the world’ has taken him over.

What does Christian leadership require today?

Of course it is true that the usual ‘conservative v liberal’ analysis of Catholic differences is trite and misleading. So is ‘reformers v traditionalists’ – by implying that only those who oppose reform are true to the church’s oldest traditions. However, ‘introvert v extrovert’ is worse still, especially as it could imply that Pope Francis, as an ‘extrovert’, is a shallow populist bent on changing everything to please the masses, whereas Cardinal Burke is a stern and deeply thoughtful disciplinarian who stands for timeless truths. This is to turn the real difference on its head. It is the pope who has thought hardest about what timeless truths require of Christian bishops in the present era – and it is the pope who is most truly ‘counter-cultural’.

The central dispute in the church is over the exercise of power and teaching authority, specifically the papal office. As the papacy is a model for all bishops, this dispute has implications for the role of Catholic bishops everywhere.

As revealed by both his behaviour and his writings, Pope Francis believes that Christian leadership has primarily to do with loving accompaniment of always fallible people on their journeys towards ‘the kingdom of God’. For Cardinal Burke on the other hand it is clear that the primary role of the Christian leader is verbally to define Christian obligations and to insist upon adherence to certain of those obligations as a condition of full access to the church’s central sacrament, the Eucharist. For Burke the accompaniment of the sinner can have only secondary importance.

In a sense the dispute is over the proper relationship between ‘teaching’, ‘ruling’ and ‘sanctifying – the three most important duties of a bishop.

Remembering that the word ‘companion’ is derived from the practice of sharing bread together, it would therefore be fairer to both parties in this dispute to describe them as idealising either a ‘companioning’ or ‘rule-making’ relationship with those they wish to lead to the living truth, Jesus the Christ.

How is conscience ‘formed’?

The difference is most clearly stated in article 37 of Amoris Laetitia, where Francis writes:

We have long thought that simply by stressing doctrinal, bioethical and moral issues, without encouraging openness to grace, we were providing sufficient support to families, strengthening the marriage bond and giving meaning to marital life. We find it difficult to present marriage more as a dynamic path to personal development and fulfilment than as a lifelong burden. We also find it hard to make room for the consciences of the faithful, who very often respond as best they can to the Gospel amid their limitations, and are capable of carrying out their own discernment in complex situations. We have been called to form consciences, not to replace them.

To spend even half-an-hour contemplating the implications of this teaching is to realise the profound silliness of describing this manner of leading the church as a mere ‘style’. Pope Francis is instead advocating and leading an abandonment by Catholic bishops of the role of sequestered and elevated legalist, imposing rules from above – to take up the role of companion of struggling Everyman, a companion who begins by discerning the drama of that struggle before speaking to it of the risen Lord. Only in that way, he insists, can consciences be formed.

A Change of Era

For Pope Francis “we are not living an era of change but a change of era.” Another way of saying that is: “this is a different time”. Cardinal Burke’s liking for the full panoply of the cardinal’s attire – including the page-borne fifteen-foot silken cloak, the cappa magna, tells us that he tends to idealise the era when cardinals had the social and civil status of the highest nobles at the court of the king. That fits perfectly with his apparent tendency to think that to rule is also to teach and to sanctify.

For the pope, clearly, sanctity demands humility – and bishops should model the latter as well if they are to teach. Companioning was an essential aspect of Jesus’s ‘teaching style’ – he was both persuasive and edifying. Pope Francis’ teaching style therefore represents a return to the earliest teaching tradition of the church – centuries before bishops became aristocrats. Few people today take handed-down edicts – declarations of law – as effective teaching. They simply tune out.

It will take just another half-hour to realise that nowhere in the world has the truth of this conclusion been more clearly demonstrated than in Ireland. As distant rule-makers since 1968 Irish bishops have steadily lost the attention of the large majority of Irish people who describe themselves as Catholic. Never persistently trying to convince their people directly of the wisdom of Humanae Vitae, the encyclical banning contraception, they relied on the equivalent of a recorded message to convey this ruling and were proven ineffectual – as they have been on every similar stand taken since.

We are standing in the midst of the ruins that this ‘style’ of leadership has created – especially the bewilderment of unaccompanied younger generations and their incomprehension of key Catholic terms such as ‘sin’, ‘grace’, ‘sacrifice’ and ‘priest’. Caught between that elevated legalism and a rapidly changing society, the generation of Irish clergy that welcomed Vatican II was left stranded, disappointed, tongue-tied and hobbled. Already, with congregations dwindling by the week, the closure of some Irish Catholic churches is under discussion.

To be companioned by a convinced Christian like Pope Francis is to be given both a glimpse and a promise of the ‘kingdom of God’ – that kingdom in which rivalry for status has been replaced by mutual love and support – true ‘family’. That is the choice that Francis is presenting to Irish bishops too, especially by his promise to attend the World Meeting of Families next year. Will our bishops be ‘up’ for companioning rather than aloof rule-stating – for the forming rather than the replacing of consciences? The near future of the Irish Church will depend upon their response. Megaphone Irish Catholic leadership, a leadership that considered regular dialogue unnecessary, has had its day. The Irish church is facing extinction because it has been deprived for half-a-century of a true communion of clergy and people.

As for the more distant future, the global popularity of the present pope is surely due to a recognition that his leadership is more closely modelled on that of the church’s founder than on the distant imperial bishops of the medieval church – and that no other ‘style’ can now bear timeless fruit.