We Are All Already Loved 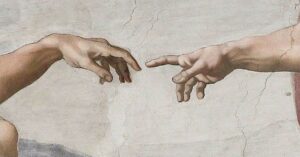 What does the Bible mean by saying we are made in the image of God?

For Richard Rohr OFM its meaning is that ‘Our DNA is divine’, that the Trinity dwell within us and that ‘the divine indwelling is never earned by any behavior, group membership, or ritual whatsoever, but only recognized and realized (see Romans 11:6; Ephesians 2:8–10) and thus fallen in love with’.

Here below is Richard’s reflection on ‘Finding Ourselves in God’. To sign up to receive Richard’s daily reflections, read to the end.

Finding Ourselves in God

Father Richard reminds us that we are created in the image and likeness of God, which offers us a solid foundation from which we can operate in the world.

The biblical creation story says, “Let us make humans in our image” (Genesis 1:26). The plural pronoun is a first hint that we are going to be brought into a relational, participatory, and shared life. The secret is somehow planted within our deepest identity and slowly reveals itself—if we are attentive to this “reverence humming in [us],” as Jane Fonda once described it. [1]

Our DNA is divine, and the divine indwelling is never earned by any behavior, group membership, or ritual whatsoever, but only recognized and realized (see Romans 11:6; Ephesians 2:8–10) and thus fallen in love with. When we are ready, we will be both underwhelmed and overwhelmed at the boundless mystery of our own humanity. We will know we are standing under the same waterfall of mercy as everybody else and receiving an undeserved radical grace, which is the root cause of every ensouled being.

When I started in ministry in the early 1970s in Cincinnati and worked with young people, it seemed like I spent most of the time trying to convince teenagers that they were good. They all seemed to endlessly hate and doubt themselves, often with a little help from parenting and clergy. Later I saw it in adults, too, who were also well practiced in hating and fearing themselves. What the Scriptures promise us is that we are objectively and inherently children of God (see 1 John 3:2). And you can’t change that! This is not psychological worthiness; it is ontological, metaphysical, substantial worthiness that cannot be gained or lost. When this given God image becomes our operative self-image, we are home free! Such a Gospel is just about the best good news anyone could hope for!

I am convinced that so much guilt, negative self-image, self-hatred, and self-preoccupation occurs because we have taken our cues and identity from a competitive and comparing world. But Jesus told us to never take this world as normative. Jesus asks, “Why do you look to one another for approval instead of the approval that comes from the one God?” (John 5:44). So many of us accept either a successful or a low self-image inside of a system of false images to begin with! (Smart, good looking, classy, loser—are all just words humans create). This will never work. We must find our true self “hidden within Christ in God,” as Paul says in Colossians 3:3. Or, as Teresa of Ávila envisioned God telling her, “If you wish to find Me / In yourself seek Me. [2] Then we do not go up and down, but we are built on the Rock of Ages. It is the very shape of all spiritual maturity, regardless of what religion we may belong to.

You can sign up for Richard Rohr’s daily emails at: the Centre for Action and Contemplation, Albuquerque, New Mexico.