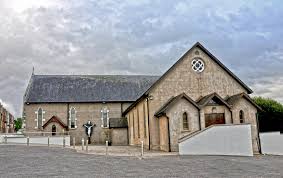 A Wexford priest, Fr Patrick Banville, has declared that “for Confirmation families, participation in Sunday Eucharist is not optional, it’s absolutely essential”

Having failed since the beginning of the school year to convince more than ten intending ‘Confirmation families’ of this, Fr Banville has called a public meeting for Thursday Feb 15th – “… I’m going to open this question(s) to the people, indeed, to anybody with an interest. What are your thoughts on the matter?”

Here below is the full text of Fr Banville’s notice in the St Senan’s parish bulletin:

The majority of Confirmation parents and Children have been absent from Sunday Eucharist since the start of the school year in September 2017. Indeed, they have been absent for many years. Nothing new there, you might argue. TOO true, unfortunately. This year though, their absence is more significant because I’ve made it abundantly clear that for Confirmation families, participation in Sunday Eucharist is not optional, it’s absolutely essential, and I’ve introduced measures to support the necessity of participation in Sunday Mass.
Unfortunately, whatever the reason, I have been largely ignored. Approximately – and this is upwardly generous – no more than 10 Confirmation children/families have been attending Mass in St. Senan’s Church over the past number of months (years!). It seems the majority of parents have refused to enter the struggle to participate in Sunday Mass but they will still present their children for Confirmation in March!
This suggests that for the majority of Confirmation parents Mass is not valued, it’s not a love-thing, a matter of attraction and encounter, and this absence (or at least the refusal to enter the struggle to get to Mass as a family) suggests that Confirmation is without a context.
I’m quite concerned about it and it occurred to me during the week that it would be good to hear what the people of the parish think. So, I’m going to open this question(s) to the people, indeed, to anybody with an interest. What are your thoughts on the matter?

Please come along to the Community Centre on Thursday, 15th February at 7.30 pm and join in the conversation.

Will the families for whom this message is intended turn up to this meeting? Is there an implied ultimatum in Fr Banville’s announcement – that Confirmation may be withheld from children whose families persist in ignoring his message?

This issue has an importance far wider than St Senan’s parish and Enniscorthy.  Should not only Confirmation but the other two sacraments of initiation – Baptism and First Eucharist – continue to be available for any family that applies, or be reserved for families already in weekly communion with the church?  Does it render these sacraments meaningless to continue with the first option?

And if the church is to adopt the second option, does it make sense for schools to be the default locus of preparation for First Communion and Confirmation – when, in many cases, only a minority of pupils in a given age cohort could be eligible?

All of these problems face an Irish Church for whom ‘Christendom’ – the ‘social envelope’ that made Catholic practice the social norm in Ireland – is fast collapsing.  The Irish Church teeters on the edge of a crucial decision that will radically affect its future and its internal relationships.

Fr Banville’s decision suggests that some priests may be exasperated by the social use of Catholic sacraments as mere ceremonial ‘rites of passage’ – something that ‘people do’ only because ‘everybody does’ – but what will they decide to do about that?

On February 24th a news item appeared in the Enniscorthy Guardian, to the effect that Fr Banville had at the last minute cancelled that proposed meeting on February 15th due to intensive and unexpected publicity – with the intention of holding such a discussion later when it could occur without such publicity.

According to the Guardian’s report, Fr Banville had announced on the parish Facebook page on Feb 15th:  “In light of the very intensive – and unanticipated – media interest in tonight’s proposed meeting in St Senan’s Parish, I have decided to cancel the gathering. The proposed ‘faith formation conversation’ I initially envisaged is, I believe, an important one and it does need to occur. To properly occur, it should proceed in a more structured and shared manner, and it needs to occur without making individuals the subject of publicity or attention.”