What does Pope Francis know of the Irish Church now? 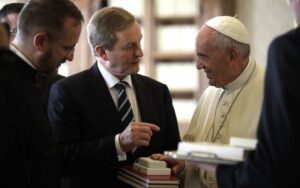 (N.B. in light of new information received on Friday 27th Jan. 2017, this piece has been edited to correct our previous understanding of Jan. 24th, 2017 that, in line with precedent, Pope Francis would issue a textual response to the Ad Limina visit of Ireland’s bishops to Rome, 15th-25th January, 2017.)

In the past such papal addresses have given the journalists and people of the countries concerned some idea of what a reigning pope sees as the priorities for the bishops concerned.  For example, the Ad Limina address of Pope Benedict XVI to the Irish bishops in October 2006 emphasised the need to care for victims of clerical sexual abuse, while that of Pope John Paul II in 2001 called for ‘new structures and programmes, that help to build a greater sense of belonging to the ecclesial community’.

This leaves those at home guessing, from scant clues, at the picture of Ireland that has formed in the mind of Pope Francis as a result of the reports our bishops delivered to Rome before this visit.  We are even more in the dark than usual, and will have some obvious questions as to what exactly the pope was told about the real state of affairs in Ireland – questions that were not answered by the press conference given by four of Ireland’s bishops on Jan. 20th.

For example, have our bishops updated the message that Archbishop Diarmuid Martin gave to Pope Benedict XVI in 2006:  “I can go to parishes on a Sunday where I find no person in the congregations between the ages of 16 and 36. None at all.”  Have they explained their own failure to research the causes of this youth exodus among young people themselves, in serious studies aimed at identifying causes and possible solutions? Were they able to point to research explaining why clerical vocations are now so rare? Have they fully explained the looming ending of the regular weekday Mass, due to a chronic shortage of priests – and the tiredness and low morale of an ageing clergy?  Have they explained their own general avoidance of regular dialogue with lay people on all of these matters, in contexts which would allow the hardest questions to be put and addressed?

Archbishop Eamon Martin’s speaking notes for his address to the pope at the beginning of this latest Ad Limina visit to Rome have also given us cause for concern, especially this passage:

“We also thank God for the many shoots of new growth and renewal that are emerging in parishes and dioceses all over the country, especially in catechesis, lay involvement and pastoral outreach to the marginalised.“

We are concerned that if this theme of ‘new shoots’ has been exaggerated in Rome this month, our bishops may have ‘talked down’ all evidence of church decline in Ireland, and ‘talked up’ whatever signs of renewal they have themselves encouraged in their own dioceses – to give the pope an impression that the Irish church has turned a corner and is now already on an upswing. That is not the impression that most of us have.

But what do our readers think?  What do you see in your own church context?  Are you observing more ‘green shoots’ than reasons for concern?  Please let us know – to help us comment accurately on the situation as it now is.