When did Jesus call anyone to a secondary role in the church? 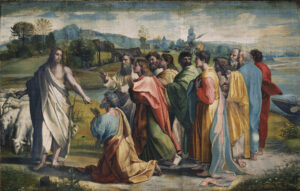 That Jesus called people to ‘follow me’ in the Gospel is indisputable, but was he calling some to a primary role of ‘ministry’ and others to be merely receivers of that ministry – a secondary role? All of the mainstream Christian churches are organised on that pattern – but what Gospel passages could be used to justify such an understanding?

Aimed at promoting vocations to the ‘priesthood or religious life’, a recent pastoral letter by the Irish Catholic bishop of Down and Connor diocese, Dr Noel Treanor, begins with a retelling of the story of the ‘Rich Young Man’, (e.g. Mark 10: 17-31). This man ‘went away sorrowful’ rather than do as Jesus suggested: sell all he had and give it to the poor and then ‘come follow me’. The bishop concludes: ‘He could have been a great disciple, but instead of trusting Jesus he followed his own path’.

By implication this young man was turning down a call to the role that the Catholic priest now occupies. However, that man’s question to Jesus had simply been ‘what must I do to inherit eternal life?’ That is clearly a question that all of us would ask – including all women – and is therefore not evidence of a call to a differentiated and elevated role.

As for Jesus’s invitation to then ‘follow me’, this was a call to share a life of poverty and powerlessness, not a call to the pulpit or the altar – or to membership of a cadre housed and financially supported by others. Jesus later told all of those who followed him not to ‘lord it over’ one another, and they included women. The earliest Christians also followed the instruction to give away all they had without interpreting it as a call to belong to a superior priestly caste (Acts 4: 32-35).

So if that story of the ‘rich young man’ is singled out as an exemplary ‘priestly vocation story’ from the Gospel, what does that tell us about the weight of Gospel evidence that Jesus was bent on forming a two-level church of primary and secondary members?

Similarly, the passage in Luke Chapter 10, in which Jesus sends his disciples two-by-two to the surrounding villages, makes no mention of this as a call to a permanent and superior ministry. These disciples were to heal the sick and proclaim the message of peace – but these tasks required no complex theology, only a firm belief in Jesus himself. As these ‘70’ are never elsewhere mentioned there is no reason to believe that this was anything other than a single time-limited task that could be given to any disciple. There is therefore no justification for using this passage as proof of Jesus’s institution of a two-level church system of permanent ministers on the one hand, to be supported by mere permanent recipients of ministry on the other.

More importantly, nowhere in the Gospels does Jesus call anyone to a lifetime role of subordinated and passive reception of the wisdom and ministry of others. All ‘callings’ fit the same single pattern : they are callings to obey the commandment of love and to an active role of spreading the message of the coming of the kingdom – and those closest to Jesus at the end are solemnly warned against a presumption of ‘lordship’. There is no insistence on a distinctive dress or lifestyle for a separate priestly caste, such as celibacy and solitude.

Moreover, in the parable of the vineyard and the workers who start the day at different times, there is a clear warning to these first followers against any belief in their own superiority. Throughout the Gospel, and repeated especially in the epistle of James, there is an insistence upon equality and mutual service, and a warning against ‘class distinction’. When Jesus tells us that those who obey his teaching that he and his Father will make their home in us he is clearly not promising this just to a church elite.

Necessarily, of course, those attracted to Jesus will pass through different stages of understanding of his message, but this cannot justify a belief that some will acquire a deeper understanding that will always be denied to others. To take such a view is to tell the non-cleric, male or female, that there is after all not much point in coming to Mass in the expectation of learning anything of critical importance.

Jesus never claimed a priesthood distinct from that of all of the children of Israel – and he called all equally to follow him. If only some of the baptised are called to ‘priesthood or religious life’, must this not imply that a majority of the baptised are called merely to a non-priestly and non-religious life? How can this be sensible, when the clear implication must be that it is especially Catholic non-celibates – including parents – who must occupy that negative niche?

Where in the Gospel does Jesus call anyone – and parents especially – to a non-priestly (i.e. non-sacrificial) or non-religious life?

And where is the evidence that baptism was ever intended as the entry point to such a state? By baptism every Christian has a priestly and therefore sacrificial role. 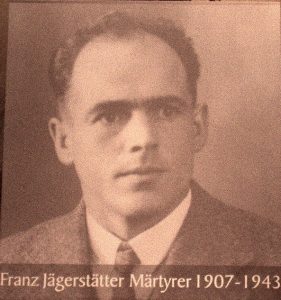 The hierarchy of the Irish church have yet to catch up with the implications of the story of the Austrian Catholic farmer Franz Jagerstatter – who in 1943 resisted calls by his own bishop to submit to the Nazi order to join Hitler’s ferocious army in its unjust war against Russia. Franz was guillotined by the Nazis on August 9th, 1943 as a consequence – but declared a martyr by Pope Benedict in 2007, and beatified on October 26th of that year.

Without the witness of Franz Jagerstatter and other individual Austrian Catholics who defied the Nazis the Austrian Church would be remembered for the compliance of its bishops with the Nazi takeover of Austria in 1938 and with the war later waged for the world dominance of the Third Reich.

Why have Irish bishops yet to affirm the importance of the principle of the freedom of conscience of every individual baptised Catholic – even though the Ryan report of 2009 blamed the failures of Irish Catholic civil servants to protect Catholic children on the problem of lay deference to clergy?

When will Irish bishops admit that lay deference to clergy has caused incalculable damage to the Irish Church – and call an end, finally, to the era of deference?

And create the structures promised by the Vatican II document Lumen Gentium (1964) – to enable any Catholic to exercise the Confirmation privilege of speaking their mind on matters affecting the reputation of the Church?

It was surely the official political status that the clerical church acquired in the fourth century that created the two-level church structure that was still normative at the start of the twentieth century – and collapsing at its end. If we are looking for the roots of Catholic clericalism – and the current crisis of the western church – it is that binary understanding of Christian responsibility we must especially question.

Why should Ireland’s young people be flocking to services addressed by ageing celibates who can never address directly the immediate issues those young people face – when their own parents have already mostly been alienated by the expectation that their only role is to sit there and absorb this non-wisdom – never in their lifetimes to be respected as intelligent Christian mentors in their own right? If the Holy Family is considered inspirational to parents, why is Christian parenting itself denied the status of ‘ministry’ – the pastoral (i.e. caring) ministry most likely to be informed by the Holy Spirit in the guidance of children and young people?

As St Paul insisted, all Christians are equally called to lives of love and sacrifice – and Jesus’s call to take up the cross was obviously not addressed just to some. ‘Vocational’ initiatives that continue to call only young men to priestly lives remote from the typically sacrificial challenge of parenting especially – are out of time, absurd and bound to fail. They belong to the 1950s, not to 2019.

If only the ordained priest is called to be ‘in persona Christi’, to what ‘persona’ is every other baptised person called?

The continuing absence in every Irish Catholic diocese of a regular Church forum in which such obvious questions can be asked speaks for itself. The Irish Catholic clerical system has made itself unquestionable by – and therefore incomprehensible to – the very people it still expects to finance it. Is it truly a mystery that so many are saying ‘enough already’ and walking away?