Who will break the Bread for us?: Disappearing Priests by Brendan Hoban (2013) 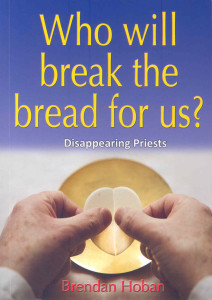 In 1982, 46 priests of Killala diocese gathered for their annual retreat. That was 30 years ago.

In less than 20 years time, in 2032, when we will be celebrating 1600 years since the coming of St Patrick, the statistics indicate that the number of priests in Killala will be six.

Who will break the bread for us? isn’t, of course, the only question that needs to be asked as our Church faces a difficult future but it is of immediate and critical concern.

And unless we do a Eucharistic famine will prevail in Ireland as parishes without Mass will lose their focus and their resilience.

For the first time in many centuries we are facing the collapse of a scaffolding of worship that was sustained even during centuries of persecution.

Unlike other fundamental questions we need to ask ourselves as a Church, Who will break the bread for us?

Our priests are disappearing and we need to do something about it. Now.

About the Author
Brendan Hoban  is parish priest, Moygownagh, Co. Mayo, and a founding member of the Association of Catholic Priests.