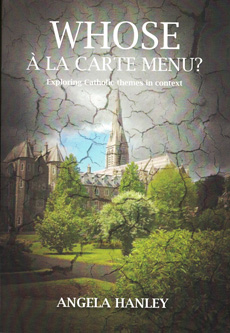 Whose Á La Carte Menu? takes a number of aspects of Catholic teaching and offers an explanation that respects the intelligence of the reader, yet keeps the information free from technical terms and theological jargon. The scope of the topics discussed is broader than just Church teaching (birth control, papal infallibility, female priests), encompassing issues that are important in the wider social context, such as Catholic fundamentalism, translation of the missal and the myth that sexual abuse arose from a liberalism in the Church. The selection of topics is eclectic,
and resulted from conversations with people who showed great interest in theological discussion, but felt the lack of their knowledge.

Words like canon law, doctrine, dogma, infallibility, etc., are well known in the Catholic vocabulary. Yet many people raised with a Catholic background have difficulty explaining exactly what they are. Why? Simply because they have never been given an accessible explanation of these concepts and terms in plain language. Given that it was restricted to the clergy, a sort of mystique surrounded theological education, as it it was a precious knowledge to be saved from contamination by the masses.

Through plain and straightforward language, the author has looked to some of the best scholarship in the Church since the Second Vatican Council and attempted to make it accessible. In this, she is a mere wren on giants’ shoulders.

About the Author
Angela Hanley was born and currently lives in Athlone. Co. Westmeath. She studied theology as a mature student, bringing life experience to the academic study of theology. She is author of ‘Justified by Faith: an Irish missionary experience in Malawi’ and co editor (with Dr David Smith MSC) of ‘Quench not the Spirit’, a book of essays to honour Fr Sean Fagan SM. She regularly contributed articles to a number of religious periodicals. Her current research study is on same-sex unions for Catholic gay/lesbian couples.  She is married to local historian Gearóid O’Brien and they have two adult children and two grandchildren.