Why does Pope Francis so often Speak of the Devil? 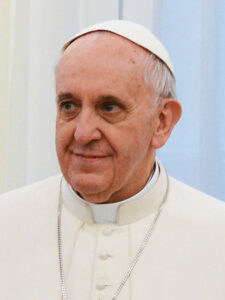 “I personally deserve attacks and insults because I am a sinner, but the Church does not deserve them. They are the work of the devil. I have also said this to some of them.”

So said Pope Francis in mid September 2021, in conversation with Slovakian Jesuits.  He was again arrestingly blunt, even remarking that in his recent serious bout of surgery for an abdominal complaint ‘some people wanted me to die‘.

And again no one noticed that what the pope had not done in Slovakia was to name or demonise any one of his enemies – even though some of those are well known and clearly ‘gunning’ for him.

He never does do that.

Ancient Patterns had a Name

To speak of the devil instead is for the pope to avoid ‘demonising’ anyone in particular, and to draw attention to something that secularist critics of Christianity badly need to notice – the pervasive patterns that characterise all injustice and violence.

In the very week that Francis was speaking in Slovakia the international environmental organisation Global Witness reported that in 2020 no less than 227 people were killed trying ‘to protect forests, rivers and other ecosystems that their livelihoods depended on’.  Meanwhile the plight of immigrants fleeing from violence and climate degradation was still filling the western news.

At a time of deep crisis, more than two centuries after the rational 1789 programme of liberty, equality and fraternity,  those goals are still far distant – and may even be receding – for many of the world’s people. Moreover, even in a peaceful western city, opponents of a corrupt Russian oligarchy can be poisoned with a nerve agent or a radioactive substance, while in Istanbul in 2018 an equally brutal fate befell a Saudi journalist who had criticised an Arab ally of the USA.

The evidence is undeniable: the repeating patterns of evil known by the name Satan in the ancient world are alive and well in the wake of the secular Enlightenment.

The Adversary and Accuser

When the pope speaks of the devil he is also speaking always of a repetitive pattern of behaviour – in this case adversarialism, expressed in ‘nasty comments’ and ‘judgements’ on his sayings ‘without entering into a real dialogue’.

Notoriously, unsubstantiated accusation also came his way on an important day in Ireland in August 2018 – from a prelate patronised by the ‘news’ outlet that many are now associating with his criticism of ‘a large Catholic television channel that has no hesitation in continually speaking ill of the pope’.

The name Satan originally meant ‘the accuser’ – and Satan has also traditionally been known as ‘the adversary’. The rush to judgment, and then to accusation and condemnation without dialogue, that characterises the right-wing Catholic attack on the pope is part of the same ancient pattern.  It is an evil contagion that needs to be named, understood and renounced – in the church as well as the world.

It is especially because of his recognition that the pyramidal church of Christendom has had its day – the church that offered dizzying careers to ambitious men – that Pope Francis is hated by those who aspired to grandeur. Nothing annoys them more than his intention to ‘invert the pyramid’, his confession that he is a sinner, his turn to synodality and his refusal to occupy the lavish papal apartments in the Vatican. Essentially he is bent on ending the era of bishop-aristocrats, when ‘the prince of this world’ had so obviously corrupted the leadership structure of the church – and that programme is anathema to narcissistic men who want exactly that aristocratic role.

It is the very same pursuit of grandeur in the secular world that is destabilising the global climate and uprooting millions.

Pope Francis is simply giving the devil his due, and offering to his enemies the opportunity of conversion, repentance and redemption. Christians who read the Gospel will remember that Jesus never targeted an individual human enemy either – and yet saw Satan fall like lightning from heaven.

He believes that no such prayers are available in any church publication or website.]

The report of the Dublin archdiocesan 'Task Force' on the imminent crisis in the diocese offers no encouragement to believe that Ireland's 'Synodal Pathway' - announced with fanfare in March 2021 - will sufficiently address this crisis.

As all Irish bishops well know, the 'co-responsibility' advocated in the Dublin Task Force report has been sabotaged time and again by canonical rules that deny representational authority and continuity to parish pastoral councils.  ACI's 2019 call for the immediate honouring of Lumen Gentium Article 37 becomes more urgent by the day and is supported by the following documents - also presented to the ICBC in October 2019.