How will Irish bishops ‘jump’ on ‘Liturgy Wars’? 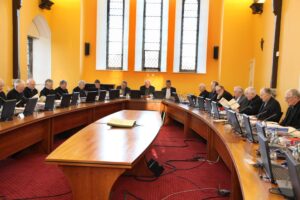 With the next conference of the Irish Catholic bishops set for October 3rd, 4th at Maynooth, many will be eager for news of any decision on the English translation of the Mass liturgy – a serious bone of contention for decades.

On Sep 9th, 2017 Pope Francis declared in the document ‘Magnum Principium’ that he was turning the duty of deciding the Mass texts over to local bishops.

This could open the way to an abandonment of the currently recommended translation of the missal that came into use recently – to loud criticism from many and frank rebellion from some – over terms such as ‘consubstantial’ and ‘oblation’, and endlessly ponderous sentences in the Eucharistic prayers.  (One Irish priest declared these to be literally ‘unspeakable’.)

For a brief history of a half-century of church debate on the liturgy, look to the National Catholic Reporter’s article:  ‘Magnum Principium’ is latest event in ‘liturgy wars’ .

For the reaction of Ireland’s Association of Catholic Priests, look to:  ACP Welcomes Pope Francis’ move on Liturgical Translations