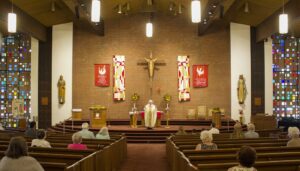 “Many of the young have left because they have not found holiness in the Church, but rather mediocrity, presumption, division and corruption.”

This is the conclusion of the 2018 World Synod of Catholic bishops on Youth.1

If Ireland’s bishops thought differently about Ireland’s young people they would surely have said so by now – they too had been gathering data for years on Ireland’s teenagers, to be ready for this synod.

Irish bishops had not protested in 2017 either, when the US Barna Research Group reported that young Irish people were increasingly dissatisfied with what they see as the passive/conformist faith of older generations – while one in four Irish teenagers claim to have no religious belief at all.2

‘Share the Good News’ – the new Irish catechetical directory launched in 2011 – was even earlier evidence that Irish bishops could see the root of the problem. Aiming to make adult faith formation central to the transmission of faith in Ireland, this catechetical programme could have had us ‘walking together’ a decade ago.

Tragically, few parishioners anywhere ever even heard of it. Having lamented in 2006 the absence of teenagers and young adults from Dublin congregations, Archbishop Diarmuid Martin confessed in 2019 to the Irish Times that he did not even know what had happened to ‘Share the Good News’.

As echoing seminaries and the predominance of grey heads at Masses tell exactly the same tale, the announcement by Irish Bishops in March 2021 of a ‘Synodal Pathway’ toward a national synod, with clergy and people walking together in dialogue, was welcomed by all of the church-going people I know.  They can see the cliff edge to where walking apart has led us.

Though holding dearly to a creedal Christian faith Irish Catholics surely know that our Irish faith formation system – far too reliant for too long on schools – is a one-legged stool that fell over decades ago.  With parents mostly out of the faith formation loop for half-a-century it was inevitable that by now the parents of today’s teenagers would themselves mostly be missing from Mass, even before the pandemic.

It is bewildering therefore to find some self-described conservatives striking a very different note.  Here is Michael Kelly, editor of the Irish Catholic, on May 8, 2021.

“…the closer one is to active participation in the life of the Church, the more apprehensive one is about the potential pitfalls of such a synod.”

The cause of this apprehension? MK explains: “There is an anxiety that the synod will be little more than a ‘talking shop’… One young woman told me she was worried it would be cynically used to try to ‘water down’ what Catholics believe to make it more palatable.”

And then the editor of the Irish Catholic reveals his greatest fear – that observant Catholics, the young especially, will feel as the elder brother of the prodigal son had felt at the killing of the fatted calf for his waster of a brother. They may ‘wonder why their counter-cultural witness is under-valued by the Church at a time when they have taken a hammering from their friends and families for their Faith.’

Knowing no one who thinks remotely this way I wonder if anyone else does. Knowing also of young observant Catholics in my own diocese who think the exact opposite I seriously question whether any young Catholic of deep faith could think like that.  In my experience the most committed young Irish Catholics have often been prodigals themselves – disconnected and lost in the famine of meaning that mere secularism too often causes. These are very far indeed from the jealousy of the elder brother.

If this is Michael Kelly’s ‘take’ on Ireland’s  ‘conservatives and liberals’ – that only the former hew loyally to the faith of our fathers while the latter are busy filling watering cans to destroy it – and that this is where this synodal pathway is headed – he needs to think again.  Instead, in my experience, it is those Catholics who are most solid in their faith who have been most hurt by decades of clerical aloofness, by scandal upon scandal and by an effective ban on honest conversation.  It is therefore these same people who are most impatient for walking together now.

Most importantly, this tired pitting of conservatives against liberals is a formula for intellectual and ecclesiastical inertia, at a time when inertia cannot be an option. To be conservative about what lies at the summit of the hierarchy of truth, and to want to pass that on, is surely to lament the absence of that passing on in too many Irish homes and to want to end that situation urgently.

Why did that handing-on of faith end in so many  homes?  Michael Kelly knows the answer – because of an obsession among some in the hierarchy for making rules about matters that are secondary to the Great Commandments – what Pope Francis has rightly called the fixation on sex.

Every family can pass on what lies at that summit of truths – the Great Commandments of love of God and neighbour – because love is what families do best. The focusing of clerical authority on the secondary rules that apply to the detailed regulation of sex – and the magisterial guillotine that fell, in 1968, on any dispute about that – has been disastrous.  Of all members of the church who could have taught persuasively on birth regulation, celibate Catholic clergy were by far the least likely to be persuasive, and they knew it.  That was when our walking apart truly set in.

As a consequence, this obsession with the minutiae of sex was accompanied by the collapse of the church’s authority – because the Gospel is centrally about justice, the daughter of love – and concern for both love and justice were too often missing from Mass homilies – and from the church’s handling of clerical sexual abuse.

From the era of Pope John XXIII 1958-63 the principles of Catholic social teaching could and should have been central to preaching in Ireland. They were generally absent, and the structures for regular dialogue promised by Lumen Gentium 37 were never implemented.  This ensured the disasters we have witnessed since.  It is this that explains the disgust of so many young  people who have not found love and holiness in the church – or even honest conversation –  ‘but rather mediocrity, presumption, division and corruption’.

To be a conservative in the truest sense – to hew to the law of love above all – must also be to realise that freedom is at the centre of that – and freedom is what liberalism is all about.  The pitting of Catholic liberalism against conservatism – in some kind of eternal struggle – is an editorial and  philosophical error, because the nature of true freedom is something that liberals themselves debate and explore and disagree about – and people of deep faith know that true freedom is found only in relationship with the living Word.

It is this discovery that awaits us as we walk together – that the long absence of regular opportunity for getting to know one another is the historical source of our polarisation and that we probably have all far, far more in common than we know.  The elder brother, or sister, mindset described by Michael Kelly – oblivious of the existential crisis the Irish church is facing and complacent about its obvious near-death – cannot be compatible with the deepest faith and is surely very far from the minds and hearts of most observant Irish Catholics today – of whatever generation.