Christendom is over – in Ireland too, thank God? 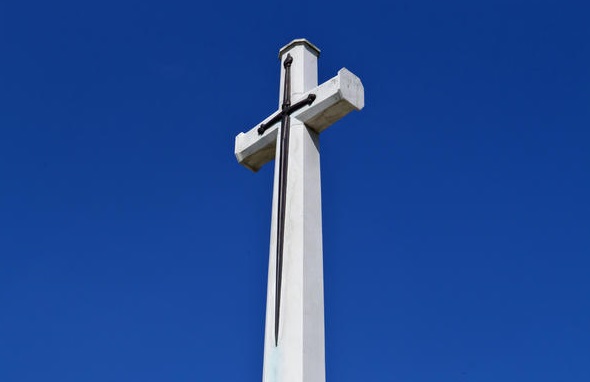 The ‘Cross of Sacrifice’ – an Ypres memorial of World War I, linking the Christian cross and the sword – the symbol of state power.  Some historians now regard World War I (1914-1918) as the death knell of Christendom, the long alliance of European Christian churches with the state which began in the 4th Christian century.

‘The Church’s mission is not to compel the unwilling, but to invite the willing.’ – Bishop Leo O’Reilly of Kilmore – Knock, June 17th 2018.

ACI does not usually publish here the complete homilies or other statements of Irish bishops.  As these are available at another click on the website of the Irish Bishops’ Conference, we tend to highlight especially newsworthy passages, and provide that link for those who wish to find the full text.

In this case Bishop O’Reilly’s entire homily is worth quoting – because it poses a question. It may also mark an historic turning point for the Irish Catholic church – a deliberate turn away from reliance upon the state and its laws to promote and preserve Christian values in Ireland.

“A state is a compulsory political organization with a centralized government that maintains a monopoly of the legitimate use of force within a certain geographical territory.”

So declares the Wikipedia article on ‘State (polity).’

As the usual meaning of ‘to compel’ is to use at least the threat of force, it follows that church reliance upon the Irish constitution to prevent the legalisation of abortion was church reliance upon the state’s potential use of force to achieve that objective.  So, if an Irish bishop now declares that the church’s role is not to compel the unwilling, is he marking a profound shift in the Irish Catholic church’s attitude towards the state, a shift which marks effectively the end of a centuries-long historical era on the island – the era of Christendom?

Already, in 2014, Archbishop Michael Neary of Tuam had remarked that ‘On the very edge of Europe, we are hearing the last vestiges of Christendom in their death-rattle.’  He emphasised immediately that he was not speaking of the end of Christianity in Europe, and that discernment on the distinction between these two terms was already ongoing in Ireland.

Christendom was essentially the arrangement whereby state and Christian church were in partnership – an arrangement which began in the 4th century CE and continued in most of Europe until the 20th.  As Christianity grew rapidly in the Roman empire in the first three centuries, and is doing the same today in, for example, China, Africa and India, it does not follow that Christianity cannot thrive in separation from the state.  And as secularism grows by exploiting the scandals of Christendom (e.g. the persecution of ‘heretics’ and the ongoing Irish church-state scandals of the 20th century) it is not difficult to make a case for what Bishop O’Reilly seems now to be suggesting.

If it is true that Irish bishops are now discussing the end of Christendom in Ireland also – and discerning together a different way forward for the church – this process of discernment must surely be widened to encompass the entire Irish church – especially in the wake of the referendum on abortion.  The missionary endeavour commended by Bishop O’Reilly in the same homily on Sunday June 17th was the campaign to retain the 8th amendment – an endeavour which ironically focused upon supporting state compulsion to prevent abortion. There is the danger that disappointment over the referendum result on the part of the ‘No’ campaigners could cause bitterness, anger and polarisation in the Irish church rather than calm reflection.

Perhaps, in attempting to counteract that, Bishop O’Reilly, while welcoming the fervour of all those who struggled for that objective, is also inviting them to think no longer in terms of state compulsion?

All of this provides impetus towards a discussion that the entire Irish people of God needs to have.  Quite obviously different members of that community took radically different positions on the 8th Amendment, and some voices are calling for the banishing from the sacraments of those who voted ‘Yes’  (as if this was even feasible).

Bishop O’Reilly’s fascinating homily poses the strong possibility of a different ‘way of going’ – towards a realisation that state compulsion and the ‘Good News’ were never truly compatible, that Christendom is indeed over in Ireland also, and that all of us need to listen to one another in discerning a missionary way forward in a different era.

Already here we have provided a link to an article by Jesuit commentator Thomas Reese – arguing that the pro-life movement in the USA needs now to turn the main focus of its campaign to the cause of greater social support for women who become pregnant. This is in line with the core principle of solidarity that grounds so much of Catholic social teaching.

Thomas Reese’s argument has relevance now in Ireland also.  And there are many other critical social problems that need addressing by all men and women of goodwill on the island.  If the ‘closed book’ of Catholic Social Teaching is ever to be opened here, surely now is the time?

And as the many scandals of Christendom remain the wellspring of European and Irish secularism, is there not indeed good reason to welcome a new post-Christendom era in Ireland as well?

Bishop O’Reilly’s homily carries echoes of the message of not only Fr Thomas Reese SJ but of Fr Richard Rohr OFM, who was in turn echoing Rev. Martin Luther King:

“The church must be reminded that it is not the master or the servant of the state, but rather the conscience of the state.”