‘It’s about the Amazon, not clergy!’ – Pope Francis surprises yet again 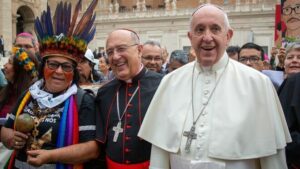 Pope Francis greets some Amazonians at the Rome Synod, Oct 2019

‘Pope Francis rules against ordaining married men in Amazon’. So declared the BBC on February 13th, 2020.

‘Pope Francis Sets Aside Proposal on Married Priests‘ insisted the New York Times on the same day. From such headlines we gather clearly what media were expecting from Pope Francis in relation to the Amazon region in February 2020:  a dramatic shift in the church’s longstanding requirement that applicants for ordination must opt for celibacy.

Instead the pope has issued a defiant call – in ‘Querida Amazonia‘ – for an end to injustice and cruelty – and ecological suicide – in one of the world’s crucial ‘lungs’, the huge but now threatened Amazon basin region.  For a man who himself operates on only one functioning lung this is a clear assertion that for the Church our internal problems are secondary to our concern for a world that is in greatest danger from ourselves.

For the National Catholic Reporter Querida Amazonia is an impassioned plea by the pope for an end to ‘crime and injustice’.

Is it also a ‘no’ to the request of most Amazonian bishops for an end to the ban on ordaining married men?  That is not at all certain. For all we know, Pope Francis may be reserving that issue for another document devoted to such internal church issues.

As we wait for clarity here in Ireland we might reflect on what makes ordination no longer a headline option for those choosing a career in school.  An unjustifiable absence of formal research into that question leaves us reliant on guesswork and private networks, but there is no reason to suppose that priestly celibacy is the only, or even the major, reason for that lack of interest.  Far more likely is an inability on the part of the young to see any vital connection between the Mass and the future of the planet – a future that becomes more problematic day-by-day.

Given that the Mass is essentially a celebration of selfless sacrifice – a life given so that others may be saved – and that the ‘giving up’ of all wastefulness and excess and economic injustice will be key to the future, it is likely that Ireland’s ‘vocations crisis’ has to do with the inability of too many Irish Mass celebrants to notice this and to adapt their liturgies and homilies accordingly.

How many have noticed that ‘climate anxiety’ is now a growing factor in today’s challenges to youth mental health – as revealed in a Guardian article of Mon 10th Feb, 2020. [‘Overwhelming and terrifying’: the rise of climate anxiety]

To climate activism Ireland’s young people could also be adding prayer to the Holy Spirit of self-sacrifice that has guided the whole church from the beginning, but how many Irish mass celebrants of today are seeing and saying that?

See also ‘Why did Francis punt on married priests in his Amazon document?‘ by John Allen in CRUX.